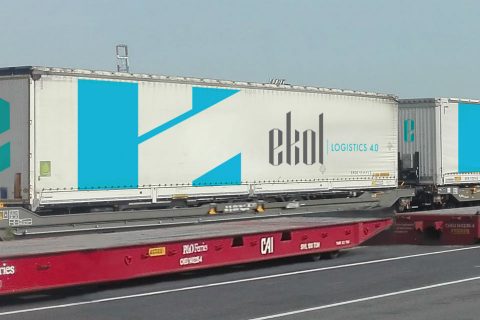 A new block train service now runs between Zeebrugge in Belgium and Trieste in Italy. The service has been launched by Ekol Logistics, which provides several other connections through Europe and will be operated by intermodal network operator Hupac, deploying its own wagon fleet.

The train departs from Trieste two times per week to embark on the 31-hour journey to the North Sea Port. Cargo can be transported with different types of equipment like mega trailers, containers and swap bodies. Around 5,000 shipments are expected to be carried out per year, the Turkey-based logistics company explained.

“We are very glad to offer to our customers a new direct connection between the Mediterranean and the North Sea. Thanks to cooperation with the Port of Zeebrugge and our strategic partner P&O Ferries, we can transport shipments to different key regions in England (Tilbury, Hull, Teesport) and other destinations with other partners”, Alaa Jennane, director of Engineering Business Development at Ekol said.

Due to existing ro ro connections between Trieste, Turkey and Iran, the new train service means the company can now provide services connecting the Middle East and European countries as far as the UK. “Together with all parties involved we managed to develop a cutting-edge service to directly connect Turkey with the UK within very competitive transit-times. This new service shows again that multimodal can be a great alternative to pure road transport”, Renzo Capanni, director of Hupac said.

Without the new service, Ekol runs a total of 48 weekly block train services between Trieste (Italy) and the German destinations of Kiel, Cologne and Ludwigshafen, Trieste and Ostrava (Czech Republic), Sete and Paris (both in France) and Budapest (Hungary) and Cologne. The Budapest-Cologne service was launched three weeks ago.