The completion of clearance works at the tunnel near Ortona end of this year will open up the intermodal rail along the Adriatic coast of Italy to a P400 loading gauge. With this step, the corridor will be suitable for semi-trailer transport. Rail freight operators active on this corridor have replied with the announcement of various new services for the industry.

The tunnel between Ortona and Pescara has long been the main obstacle on the corridor for semi-trailer transport. Now that the Italian Rail Infrastructure Authority (RFI) has undertaken clearance work at the tunnel, the entire line on the Adriatic coast is open to transport with a four meter height clearance need.

Hupac has already commenced with its first P386 gauge service to South Italy, on the route between Bari and Busto Arsizio, its rail hub on the Swiss-Italian border. It has started with three weekly departures from the North Italian hub; the first train departed Busto on the 24th of July. GTS Bari has awaited the completion of the clearance work to launch its P386 pocket wagon service. It will operate this service on the routes Bari-Bologna-Padua and Bari-Piacenza-Milan, starting with 16 weekly train pairs and hoping to add three more pairs in a later stage.

According to worldcargonews.com, Interporto Servizi Cargo (ISC) will introduces a semi-trailer service between the Puglia region and the north, focusing on trains between Verona and Giovinazzo. In a statement published by the news site, the company explained: “The new service will allow semi-trailers moving on the Greek and Turkish ferries to be transported to/from the UK, Benelux, Germany and Scandinavia over Verona, thanks to the established services of Verona Quadrante Europa.” Another semi-trailer service between Pescara and Novara was started a few months ago by IFR Srl in Pescara and MVT Italia Srl in Novara. 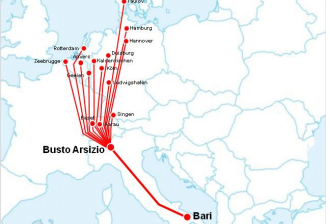