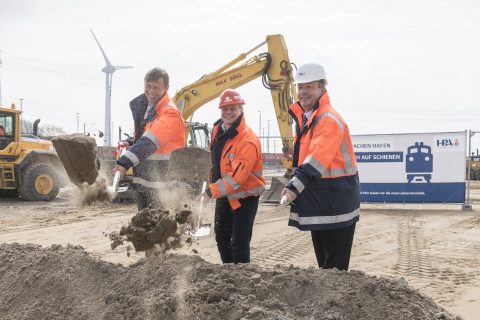 A symbolic turning of the first sod of earth has signalled the start of work by Hamburg Port Authority (HPA) on a ‘unique’ new port railway locomotive service point. The modern service facility will form part of the Alte Süderelbe rail terminal and comes with locomotive storage spaces, a workshop and refuelling station.

This new infrastructure project, described by the port authority as ‘unique’ in Germany, is intended to ease pressure on the track network and surrounding district, as well as benefit the environment by reducing unnecessary trips of locomotives running ‘light’, or without cargo.

An average working day sees around 200 trains going in and out of the Port of Hamburg, and many involve loco-only trips to social and maintenance facilities located outside the port perimiter. These unladen trips put extra strain on the existing high-volume route sections between the port and the Harburg district. With rail freight traffic predicted to rise, HPA has decided to build the new locomotive service point to substantially reduce movements of locomotives running ‘light’.

Part of an overall infrastructure expansion project for the western port area, the facility is due to begin operations at the end of this year, but not officially launched until the spring of 2018. It will provide parking bays for 32 locomotives, arranged in parallel. When completed, its centrepiece will be an 80 metre x 75 metre transfer table for moving rolling stock to parking positions.

Harald Kreft, Head of Railway Infrastructure at Hamburg Port Authority, said: “Besides providing important facilities at the starting and end points of rail journeys, our foremost aim is to avoid movements of locomotives running light. Analyses have confirmed that reducing locomotive-only trips will create the freight train capacities required to accommodate rising transport volumes at the railway hub of Hamburg.”

Ït will be available to all 135 railway undertakings (RU) that use the Hamburg Port Railway network. As well as the storage space, the service point will also house a twin-track locomotive workshop, operated by ajax Lochtechnik, a diesel refuelling station and office space.

Tino Klemm, Chief Financial Officer and board member at HPA, said: “The locomotive service point will further strengthen the port railway’s network capacity. It is the HPA’s contribution to making the Port of Hamburg continuously more attractive for RUs. At the same time, the concept benefits the environment as a lot of locomotive-only trips can be avoided.”

Maja Halver, Managing Director of ajax Loktechnik, also sees the new facility as a tool for promoting Hamburg as a business location and making it more attractivë. “We achieve that by offering fast, flexible and high-quality servicing on site, which will help increase locomotive availability rates and help the RUs cut costs,” he said.