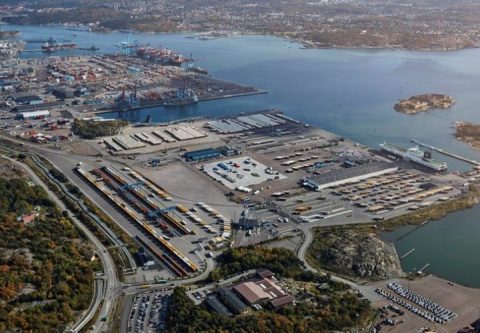 Sandahlsbolagen Sweden AB has signed an agreement with Gothenburg Port Authority to operate the port’s new intermodal terminal. They will take charge from December 2017, when the terminal moves to accommodate redevelopment work on the current site.

The current intermodal terminal, situated beside the central station in Gothenburg, will move at the end of the year to the outer port area on the island of Hisingen. This, says the port authority, is because of planned development of the city centre and the construction of the West Link rail tunnel.

It will also significantly reduce road traffic in the centre of Gothenburg. Locating the terminal close to the port will facilitate the introduction of new transport systems that will link up shipping and rail traffic. This will build on the Port of Gothenburg’s strong green credentials, with more than half of the containers it handles already arriving there by rail instead of road.

The running of the new intermodal terminal will be handled by the family-owned transport company Sandahlsbolagen Sweden AB. The company already operates terminals in Luleå, Umeå, Sundsvall and Jönköping.

Arvid Guthed, Vice President Port Development at the port authority, said: “Sandahlsbolagen has for long time shown an interest in running a intermodal terminal at the Port of Gothenburg. We are extremely pleased that one of the most experienced companies in this sector in Sweden has opted to establish operations at the port.”

Thord Sandahl, chief executive of Sandahlsbolagen Sweden AB: “We are looking forward to running a intermodal terminal beside the largest port in the Nordic region and we are proud of the trust that has been shown in us. It will be an open access terminal for all rail operators that are interested.

“I can see considerable potential to increase the number of trailer trains into and out of the port, particularly to and from the more northerly parts of the country and the Oslo region,” added Mr Sandahl. “With better access to trailer trains, the logistics situation for Scandinavian industry will be improved considerably and emissions from transport will be reduced.”

The first phase of the new terminal’s construction will be completed in time for operations to start in December, and the terminal will be fully operational by 2019/2020. Loading will take place using cranes instead of trucks and the entire terminal be electrified and controlled by signals.

Sandahlsbolagen established haulage operations more than 100 years ago in the province of Småland, when Thord Sandahl’s grandfather started delivering goods using a horse-drawn wagon. Today the group comprises a parent company and six subsidiaries, working with terminal operations, transport and contracting. The Sandahl Group head office is in Värnamo and the company has around 700 employees.