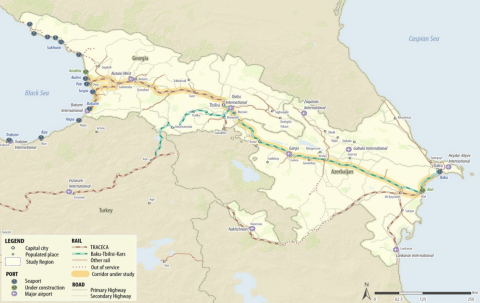 The Trans-Caucasus Transport Corridor (CTC) can reach a high-efficiency level if Georgia and Azerbaijan coordinate and follow specific actions. The World Bank has come up with a Strategy and Action plan highlighting the focus areas of the two countries, including customs processes, access transparency and fair competition, the launching and proper set-up of a joint venture, the organisation of block trains and the optimisation of intermodal infrastructure.

The World Bank carried out an extensive study on the route. The financial institution argues that the CTC route can play an important, if not the most important, role in developing the Middle Corridor with efficiency and agility. However, it claims that “despite some investments taking place, the CTC is not meeting its potential capacity to facilitate container cargo movement between China, Central Asia, and Europe, due in part to physical and nonphysical barriers along the corridor in Azerbaijan and Georgia”. As a result, it came up with some proposals.

“A one-stop-shop solution would be the ideal model that Georgia and Azerbaijan could implement in customs processes along the CTC route”, says the study. According to the World Bank, “customs in Azerbaijan and Georgia have improved in recent years. Based on survey results, there are no significant issues in Georgia, while in Azerbaijan, users noted that customs have made some positive changes in recent years”.

Yet, more improvements could help the two countries develop their shared route. In the short term, the World Bank advises the two countries to focus on “improving customs procedures including information flow and move to a one-stop-shop solution”. On top of that, they should invest in training the customs employees and make them eligible to work in coordination with other countries.

In the long run, Azerbaijan and Georgia should focus on developing a single customs area with simplified procedures and efficient operational times to avoid border delays. Additionally, the two countries are advised to create a ‘green corridor’ where customs checkpoints will no longer be used, and trains will be able to transit seamlessly and without stops. 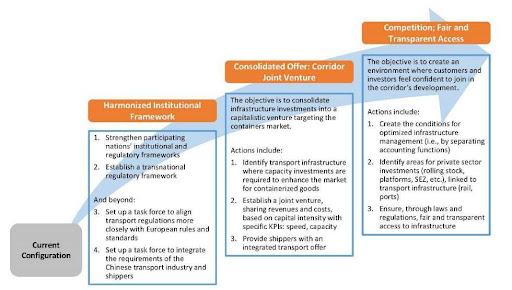 One of the CTC’s disadvantages is the lack of sufficient transparency in several procedures. For instance, the World Bank emphasises that “there is limited information on how tariffs are set and what factors affect them. Moreover, the coordination required to establish a unified tariff for the entire length of the route seems to be lacking. According to survey respondents, simplifying tariffs and aligning corridor participants’ interests would greatly reduce the cost of transportation. This lack of coordination was underscored as the weakest point affecting the corridor”.

Transparency is also crucial for the rest of the Middle Corridor. Not only in terms of tariffs but also in terms of capacity allocation and who gets prioritised over whom. The World Bank says that an open access model would be ideal in this case. “Open access is a way to ensure that all possible clients feel they have fair, transparent, and nondiscriminatory access to infrastructure and services, and at the best available tariffs. Implementing an open access policy in Azerbaijan and Georgia might improve the use of existing infrastructure while making the corridor more attractive to private operators”, states the institution.

A well-structured joint venture between the parties and a Corridor Management Information System (CMIS) would be a good solution to tackle the issues mentioned above. The idea of a joint venture between the countries is already being considered, with information citing that 2023 will be the year of its establishment. However, the World Bank warns that to establish the joint venture, the parties involved should dive deep into it and ensure that they will create a business model commercially attractive. As for the CMIS, it would contribute to making the corridor accessible through a “single window for commercial, operational and financial purposes”.

As part of the joint efforts between Azerbaijan and Georgia, the organisation of “block container train schedules that will allow seamless container shipments with predictable capacity” is a top priority. For this purpose, the countries are advised to set up a tactical operating team responsible for ensuring on-time delivery of block trains.

Infrastructure is an integral component of launching efficient, well-organised and punctual block trains. Therefore, Azerbaijan and Georgia should “reconfigure existing infrastructure including block length, passing sidings and speeds to meet container block train operations”, says the institution. Nevertheless, infrastructure should be generally improved also to facilitate multimodal/intermodal transport. Among other things, the World Bank explains that it is pivotal to improve intermodal connectivity in the South Caucasus and, specifically, the intermodal port infrastructure in the Caspian and Black Seas.

Additionally, it is essential to “reconfigure the Akhalkalaki Intermodal Station in Georgia to allow two 750-meter-long trains to park side by side for rapid container transhipment”. Finally, for intermodal infrastructure and transport to work like a Swiss clock, the financial institution suggests the creation of an “intermodal transport unit that would work on a strategic level to develop intermodal freight and on a tactical level to ensure that containers are not delayed on vessels and in port”.

On 20 and 21 April, the Track Access Charges Summit takes place. During this hybrid event, the most recent developments in track access charging (TAC) will be discussed over two days by experts from all over the world. The World Bank will be also represented there with a presentation on the CTC  and Middle Corridor tariff model and the needed developments to make it more efficient.

Are you interested in attending and finding out more on the topic? You can still register here.