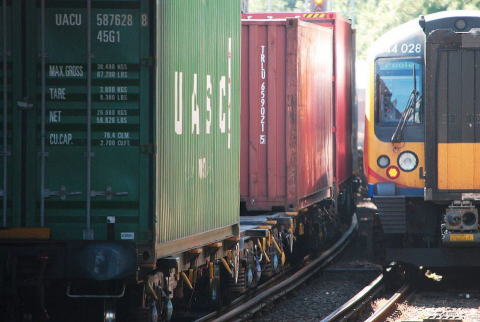 An important collaboration between rail and road has been announced, to help make the best use of transport connections between the Solent south coast port region, and the Midlands of England. The Solent to Midlands Strategy recognises the growing importance of the corridor, as a two-way flow for import and export, and the overall economic health of the UK.

Post-Brexit Britain will rely more heavily on global trade, according to economic commentators. With that in mind, two of the most influential infrastructure bodies in the UK – Network Rail and Highways England – have collaborated on a study of future trends and future requirements for the key corridor between the Solent ports (principally Southampton and Portsmouth) and the Midlands of England (including the major city of Birmingham).

In July 2020, Network Rail and Highways England agreed to work together to take forward a joint multimodal strategic study which would investigate growth on the key rail and road freight corridor between the Solent and the Midlands. This study forms part of Network Rail’s Long-Term Planning Process and Highways England’s Route Strategy and Pioneer Projects work, both of which are designed to identify investment priorities for the future.

“The purpose of this study is to develop a long-term strategy for the movement of freight along the Solent to the Midlands corridor”, said a joint statement. “Both organisations have a shared goal of keeping Britain moving, as well as obligations to meet the Government’s commitment of net-zero carbon emissions by 2050. This Solent to the Midlands Multimodal Freight Study contributes to these goals by demonstrating how both networks could be used more efficiently in terms of their overall capacity and their carbon footprint.”

The report, available in full here, recognises the two-way flow of goods in and out of the UK. Furthermore, the economic importance of the corridor has been endorsed by the government decision to award freeport status to hubs at both ends of the corridor.

The impact of the Covid-19 pandemic has been considered for this corridor and the wider road and rail networks. Changing passenger patterns around south coast – as well as the positive development of the Southampton rail network have been taken into account. While there has been an inevitable decline in passenger numbers, there is faith that this will rebound. Southampton’s Fawley Branch was recently earmarked for mixed-traffic revival, after being largely moribund for many years. At the other end, the Midlands Engine – a catch-all umbrella for economic development – has ambitions to further improve the rail network around the Industrail heartland of England.

“Rail freight has been resilient against the uncertainties surrounding Covid-19 whereas passenger rail demand has been severely impacted”, says the report. “The road network has proved resilient under Covid-19 and some freight movements have even seen an increase in comparison to 2019. This could be partly attributed to an increase in online shopping and a backlog of deliveries. It is unclear what the long-term effects will be, but it shows that the movement of freight will remain an important part of the road and rail networks.”

Southampton port has seen significant recent improvements to the rail network. Better access has been afforded for longer intermodal trains, and handling of automotive trade (mainly new cars) has been streamlined. It has not been overlooked that the rail corridor, while providing a fast track for global export, will also need sufficient additional capacity enhancements – such as connections to the busy West Coast Main Line – if the full benefits are to be realised.

Opportunities exist to make better use of rail

The timing of this study aligns well with the development of wider government policy related to the freight, transport, and logistics industry. “These policies show that there is a strong appetite for modal shift to rail as an important part of the method for the decarbonisation of the road and rail networks”, says a statement from the report authors. “Network Rail and Highways England are ideally placed to work together on decarbonisation and congestion relief across both transport networks by finding the optimal balance for rail freight transportation.”

Although a Highways England statement makes scant reference to rail, except in connection with better access for larger road vehicles on the M27 motorway around Southampton, they do concede that rail freight is an under-utilised resource. “Opportunities exist to make better use of rail to transport goods between the Midlands and the ports to reduce the volume of goods traffic on the route”, they say.