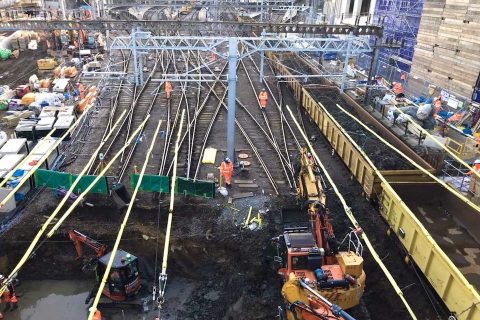 Rail freight and passenger services will be curtailed for much of January, as a vast upgrade project continues on the East Coast Main Line. The route, made famous by the Flying Scotsman express, connects London, York and Edinburgh, and carries mixed traffic to and from many of the busiest destinations for passengers and freight in the UK. The project is designed to enhance capacity, primarily for the higher-frequency passenger service planned for the route, but also for long-term planning for HS2.

During the traditional period of works over the Christmas period, the tracks into London King’s Cross station were totally replaced, to allow underground water infrastructure to be replaced at the same time. That though is just the latest in a long programme of enhancements. This month will see the next tranche begin, and that means extensive closures and diversions. When finished the ECML will be higher capacity for services from London, and for future services joining from HS2.

Network Rail teams and civil engineering partners collaborated to life all four tracks entering King’s Cross for the first time since the 1970s. The new layout will allow more trains to operate from the station, and mean more traffic on the East Coast Main Line (ECML).

Ed Akers, the principal programme sponsor for the Network Rail East Coast Upgrade project said it was an industry-leading piece of work by engineers and suppliers. “Digging out and rebuilding a major sewer would have been a complex engineering challenge at any time, even without all the additional problems of working during the pandemic. But it was delivered without a hitch and without causing any extra disruption.”

To help keep capacity for mixed traffic – including rising demand from the rail freight sector, the 1.2billion pounds (1.32 billion euros) upgrade of the East Coast Main Line will continue this month. The next stage is about one hour north of London, at at Werrington, north of Peterborough. A new tunnel will allow freight services to dive under the ECML instead of crossing it, making more capacity for traffic.

Over nine days, 16 – 24 January, three of the main tracks will be removed and the concrete box structure, which will carry the new lines, will be pushed into place. “Our teams have been working hard over the past few months to do as much improvement work as possible without disrupting services”, said Akers. “We can reach a major milestone on the East Coast Upgrade, which when complete, will bring a more reliable railway.”

Contractors from the rail freight industry have helped with the project already. Significant infrastructure trains have delivered thousands of tonnes of aggregates and rails for the renewals programme, and supported other major projects, including overhead line equipment replacements.

All the main freight operators use the ECML, and several key installations are on the route – including GB Railfreight’s headquarters, the iPortRail intermodal terminal, and centres for DB cargo and Freightliner at Doncaster.