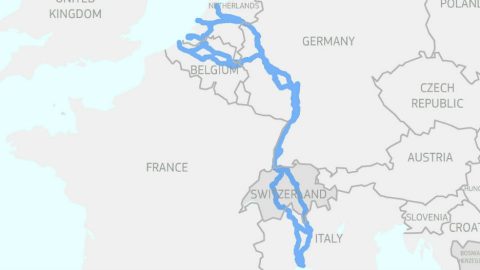 The Dutch port of Terneuzen has been linked to the Rhine-Alpine corridor. It is the third North Sea Port to be included in the rail freight corridor (RFC), which is one of the seven corridors that make up the core network of the European Union. The respective railway lines, the handover points to terminals and some selected major intermodal/bulk terminals have already been added to the map.

This was announced by the RFC Rhine-Alpine. The map can be found on the Customer Information Platform, a digital environment available for customers. In January 2020 a regular update of the maps will take place, and more information will be available by that time, the RFC said.

Terneuzen makes up the North Sea Port with Vlissingen, also in the Netherlands, and Ghent in Belgium. In addition to Rotterdam, all these ports are now included in the Rhine-Alpine corridor. According to the RFC, these four ports represent a total maritime cargo transshipment of more than 70 million tonnes, while the hinterland strategy focuses on the development of rail market share. In Terneuzen rail freight volumes are expected to double in the next ten years. “We are looking forward to support the planned shift from road to rail”, the RFC commented.

In total the Rhine-Alpine corridor includes 7 sea ports and 10 inland ports. It counts a total of 3,900 kilometre in railway lines, stretching from the North Sea ports to the north of Italy. It is the most volumuous corridor of the EU core network.