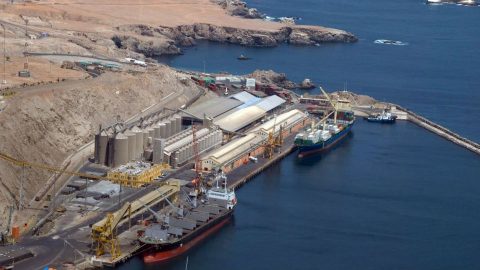 Chile and Uruguay to be included in Bi-Oceanic project

The Bolivian government wants to include Uruguay and Chile in the Central Bi-Oceanic project, which connects the Peruvian Port of Ilo on the Pacific coast with the Brazilian Port of Santos on the Atlantic coast. New branches will be established to connect the two countries to the new railway network, which has been dubbed the ‘Panama Canal of the 21st century’.

Peru and Bolivia recently signed an agreement to build a rail track between the border town of Desaguadero and the Peruvian Port of Ilo, to provide a new export gate for Bolivian goods on the Pacific coast. The initial key objective of Bolivia to develop this infrastructure was to reduce dependency on Chilean ports, an objective which has now been reversed.

The new plan is to develop branches from the main axis Ilo-Santos (3,775 kilometre distance), which will link Chile and Uruguay, apart from Argentina and Paraguay, which have been interested in the project since 2016.

The sudden shift can be explained as a response to investor’s demands. Many investors from Spain, China and Russia expressed their interest, on the condition that Uruguay and Chile were included to realise a broader network. In this way, the project becomes more appealing for rail freight companies, reducing the financial burden on the Bolivian government.

The project has already attracted investors from the UK, Switzerland and Germany. It is the most expensive international railway construction project in South America, led by landlocked Bolivia. The South American country wants to attract 10 million tonnes of cargo annually, currently arriving at the Southern Cone ( Argentina, Chile and Uruguay) from China and the EU. The Bi-Oceanic corridor would decrease journey time to Bolivia to 16-25 days.

The project will be developed by rail freight and sea shipping companies, which will obtain funds through the Inter-American Development Bank (BID) and the Development Bank of Latin America (CAF). These financial institutions have expressed its support for the project to contribute to the economic integration of the South American countries.