Today, the city of Amsterdam will be added to the Eurasian railway network with the first train taking off from the Dutch capital towards Yiwu in Shanghai region. It will travel 11,000 kilometres through Germany, Poland, Belarus, Russia and Kazakhstan, entering China through the province of Xinjiang. It is yet another city on the most popular route connecting Europe and China. 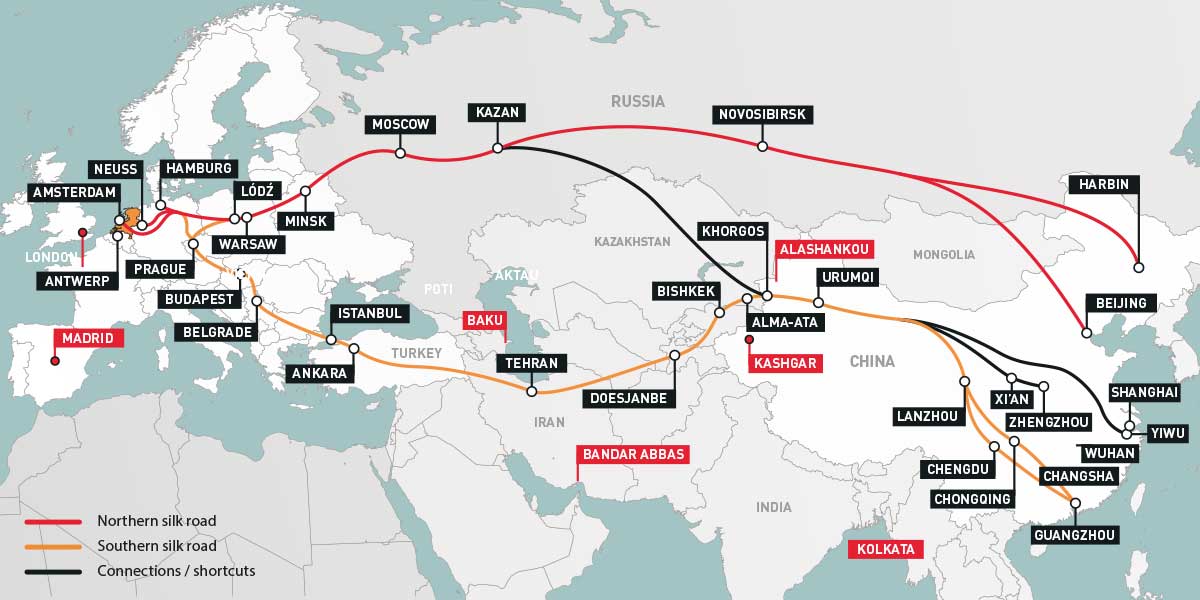 Xinjiang has transformed from the logistic channel for China-Europe trains to an international logistic hub. In comparison to 2016, westbound traffic volumes passing the region increased by 18.6 percent, according to the Urumqi Customs. Around 1.16 million tonnes of cargo worth over 12.9 billion Euros were transported last year.

The freight volumes include not only cargo moved from the region, but also goods on transit from other parts of China. According to the Xinjiang Xintie International Logistics Company, freight was moved via 19 routes to 24 cities in 17 countries in Central Asia and Europe.

In total, freight trains between China and Europe have made more than 6,200 trips since this vital West-East trading corridor opened in 2011. The New Silk Road’s international cross-border rail network has connected 35 Chinese cities with 34 European destinations over the past six years, the Transport Coordinating Committee of China Railway Corporation’s (CRC) China-Europe project reported in January this year.

Since 2011 there have been a total of 6,235 freight journeys across 57 routes. Of these, almost half – some 3,200 trips – were undertaken during 2017 alone. Zhao Jun, Head of Freight for CRC, said this number was expected to reach 4,000 in 2018, adding: “We will focus on raising the efficiency and profits and lowering the empty-loading ratio next year.”

Inspired by the economic potential of the New Silk Road, Poland will host the first RailFreight Summit, organised by RailFreight and Nieuwsblad Transport, on 20-21 March in Wroclaw. High level expert speakers will share their knowledge and experience on the silk road; the route and connections, what it means for supply chains and logistics in general, the risks, the interest of China, what it means for Poland and much more.

Registration is still open! View the programme and book your place now.