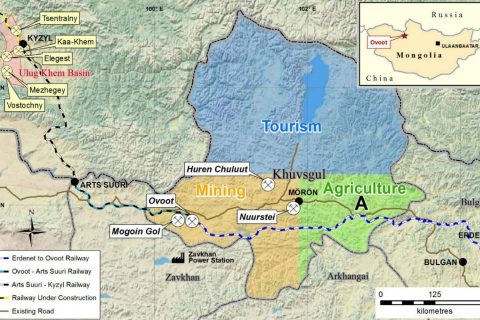 The Australian company Aspire Mining and its Mongolia-registered Northern Railways (NR) subsidiary have signed an agreement with China Gezhouba Group International (CGGC) for carrying out the final stage of a feasibility study into the Erdenet – Ovoot line in northern Mongolia.

The Erdenet-Ovoot line is part of the Northern Rail Corridor, a project connecting the national rail network from Erdenet to Aspire’s Ovoot Coking Coal Project and onto the Mongolian-Russian border town of Arts Suuri. Through the connection with the existing national railway, it also provides a direct route to the Chinese market for Russian freight forwarders. Moreover, the Russian government plans to link the rail from Arts Suuri to the Trans-Siberian Railway at Kyzyl, creating a potentially vital international rail link.

The first stage of the feasibility study was completed in January this year. In conclusion, the costs of the project were estimated at 1 billion Euros, minus contingencies. The second and last stage of the study is expected to be completed by the end of March 2018. In addition to the line between Erdenet and Ovoot, the study also paves the way for the eventual extension of the line to Arts Suuri.

As part of the contract, NR has committed to considering CGGC for the design, procurement and construction phases and if it does not award these contracts, to compensate the Chinese company. CGGC will in turn assist NR in the search for investors for the Northern Rail Corridor and planning for the extension.

Aspire has said the Northern Railway will open up significant new opportunities for various industries, small business, the community and local economy in northern Mongolia, while in the meantime integrating Russian rail planning, China’s Silk Road and Mongolia’s rail policy to create an international Economic Corridor, facilitating increased levels of trade between the three nations and the wider Asia-European economies. The 1,520 millimeter-gauge line will be open for bulk and intermodal freight trains, but could also be used for passenger services.