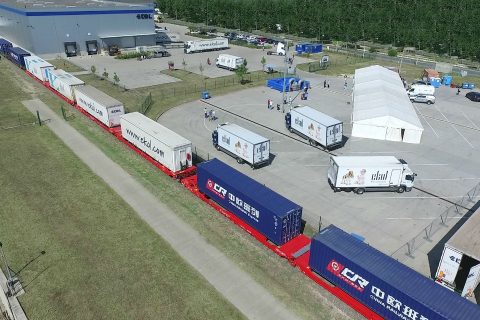 A new block train service now runs between Budapest in Hungary and Cologne in Germany. The service has been launched by Ekol Logistics, which provides several other connections through Europe. “We are very happy to open this new dedicated train service in order to connect Central and Eastern Europe with Germany, Benelux, France and the UK”, said Akos Kovács, country manager at Ekol Hungary.

The train is composed of double pocket wagons, to carry 32 megatrailers or 45’ units, and 60’ container wagons which are suitable for 20’ and 30’ containers. At first, Ekol eyed a connection between Hungary and Duisburg, but it shifted to Cologne in order to centralise its business activities, as Cologne is an important hub for freight forwarders.

The Turkey-based company ambitions to develop more intermodal connections in Europe and the CIS region. “Our intermodal investments will facilitate freight movement across Europe and CIS countries”, it states. Ekol now runs a total of 48 weekly block train services between Trieste (Italy) and the German destinations of Kiel, Cologne and Ludwigshafen, Trieste and Ostrava (Czech Republic) and Sete and Paris (both in France). It plans to add a connection between Trieste and Zeebrugge (Belgium) in the future. The new connection means the first train in Hungary operated by a third-party logistics (3PL) provider, according to Kovács. “So far, only public trains have been used in this connection.”