Freight transporters trying to find alternatives for the blockade on the Karlsruhe-Basel corridor will find an additional route from Wednesday onwards, when construction on the Stuttgart-Hattingen line will be completed and re-opened for freight traffic. With these measures, DB Netze will offer 44 train paths for freight traffic a day. However, there are additional seasonal challenges facing the sector.

On the 12th of August, water and soil penetrated part of the new Rastatt tunnel in Germany. As a result, the ground subsided and the railway tracks above the tunnel warped. The consequences for the rail freight sector have been immense. The Karlsruhe-Basel railway line is part of the important north-south corridor connecting the ports of Rotterdam, Hamburg and Antwerp with Switzerland and Italy. Alternative routes are only becoming accessible gradually and are subjected to limited availability.

In August, freight volumes across Europe were relatively low compared to the rest of the year due to the summer holidays. Whereas the important freight corridor carries an average of 200 trains a day, this was probably around a 150 trains last month. With the end of the holidays in all European countries, freight traffic is expected to push strongly this month, increasing traffic on the congested network.

Moreover, high water is expected on the Rhine this week making the barge route less attractive, points out Mark Jansen, director Operations at Hupac, one of the largest freight operators on this route. “Capacity on the barge route will be less, and hence more expensive this week.”

Construction on the Stuttgart-Hattingen route is completed a week early, to allow freight transport which was previously rerouted on the Neckar-Alb Railway to use this route instead. Consequently, reduced regional service on the Neckar-Alb Railway will be restored. But the 44 train paths through Germany are by far not enough, says Hans-Willem Vroon of RailGood, a Dutch railway lobbyist. “Even then, railway provides for the transportation of less than half of the freight headed in either way.” 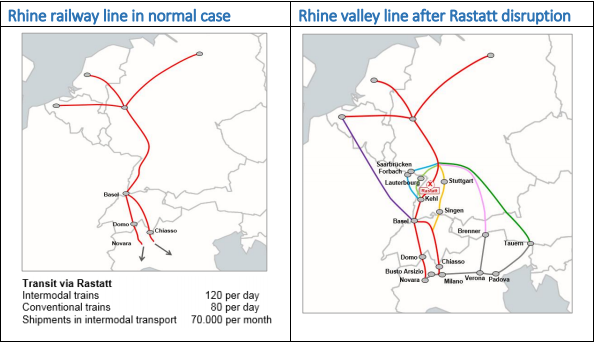 At present, the freight railways can manage only 25 per cent of the normal volumes on the alternative routes via
Germany, France and Austria. Intermodal transport, which represents the lion share of transport on the corridor, is hit even harder with diversion volumes reaching less than 15 per cent of its habitual volume. As Vroon explains, one of the bottlenecks on the route through Germany is the emplacement at Singen, where a lack of capacity on the railway results in many trains getting stranded. On the Brenner route, there is a shortage of train drivers and in some cases, locomotives that may drive in Italy. The same problem applies to the route through France, while re-routing through Austria is expensive. “We are currently able to move around sixty to seventy per cent of our operations”, said Jansen. “This is improving every week, but not every customer opts for the alternatives available, because there are extra costs involved, for them and for us.”

Today, 24 representatives of the European rail industry sent an Open Letter to Brussels, asking for immediate action to alleviate the consequences of the blockade. They proposed the setup of an international crisis management team, simplified operating procedures on the re-routing lines and a short-term reinforcement of a driver pool for the alternative routes. This last measure could increase the diversion capacity from twenty percent today to fifty-sixty per cent within 2-3 days, they claim. They also suggest research into the possibility to compensate companies for their losses, which could be running into billions of Euros, and another investigation in the causes of accident in Rastatt.

German industry lobbyists Pro Bahn and VCD also issued a joint statement, proposing a timely electrification of the Wörth-Strasbourg route to increase capacity on the German network. “In contrast to route reactivation or the construction of new connections, this measure is simple and can be implemented relatively fast.” Freight operator Kombiverkehr KG (Frankfurt am Main) has asked the German government for 250 million Euros in emergency aid for freight forwarders and companies involved in the transport chain.

In the meantime, construction work at the western tube of the new Rastatt tunnel has been restored. This is the undamaged part of the tunnel, still at a distance of 800 meters from the existing railway, explained Deutsche Bahn. In order to ensure stability and safety in this part of the tunnel, an additional concrete slab is designed that will cross the railway line about 150 meters north of the tunnel.

According to Deutsche Bahn the works will not affect restoration of the affected railway, which is scheduled to be re-opened on the 7th of October. Work on this restoration is on schedule, the rail company informed.