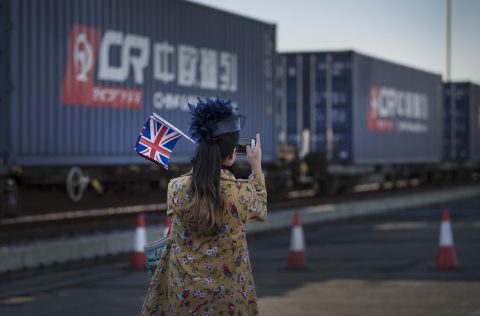 With a new rail freight line linking the north-western Chinese province of Qinghai with the European part of Russia, the number of Chinese cities connected to Europe by rail has reached twenty. Up till now, more than 4,000 freight train journeys have been made between China and Europe. We look back at the most important milestones in the development of the Eurasian rail network.

The railway connection between Europe and China is not new, cargo has been transported along this route for years. However, in 2013 China announced the Belt and Road Initiative, an ambition to boost the transport of goods along the old Silk Road trading routes. Major investments in new rail freight services were announced and so far, this has led to an increase in operations and new rail freight lines.

In April 2015, the first regular cargo train departed from the southwestern city of Chongqing in China to arrive in Duisburg, Germany. It did so crossing the Chongqing-Xinjiang-Europe international line, which was established in 2011. Although freight trains had travelled along this route before, the establishment of a regular train service was somewhat of a milestone, in the sense that it indicated the serious intentions of China and Germany to encourage the Silk Road economic belt.

The railway passes through Kazakhstan, Russia, Belarus and Poland before reaching Duisburg in a journey of about two weeks. In China, it connects Chongqing, Chengdu, Xian, Lanzhou and Ürümqi. It still forms one of the most important railway links between China and Europe today, with Chengdu being the most important hub on this route.

In June 2016 eight freight trains left eight Chinese cities simultaneously for Europe. The trains carried branded containers of China Railway (CR) Express, the new service between China and Europe. It was a great marketing act, and again an iconic moment showcasing the willingness of participating countries to make the economic corridor a success.

That year, many European and Chinese cities linked to the rail network. Just as the Chinese containers spread across the region, rail freight services connected thirteen Chinese cities with nine European cities, as well as multiple destinations in central Asia along the way. Some of the most important connections were (and still are) Suzhou to Warsaw, Lianyungang to Rotterdam, Chengdu to Lodz, Chongqing to Duisburg, Urumqi to Duisburg, Yiwu to Madrid, Zhengzhou to Hamburg and Wuhan to Lyon.

In January this year, the first train from China arrived in the UK capital of London. It was considered a major milestone, as it was the first direct freight link between the countries and the longest railway freight route so far. It connected the city of Yiwu in eastern China to London in a journey taking 18 days, crossing 12,000 kilometres. Along the route, the train passed through Kazakhstan, Belarus, Poland, Belgium and France, where it entered the Channel Tunnel.

At that point, the China Railway Corporation said that economic and trade cooperation between China and UK had maintained a ‘stable development’ over the past few years, and that the launch of the freight rail service to London was an important step in furthering trade connections. The number of Chinese cities connected to Europe was now sixteen, while London was the fifteenth European city to link to the network.

Since the iconic railway connection between London and Yiwu, more and more cities joined the railway network. In Europe, the existing connection to Hamburg and Duisburg proved to be a promising link to new connecting cities as Zeebrugge and Antwerp in Belgium and Hallsberg in Sweden.

In China, the Belt and Road Initiative has resulted in the inclusion of areas that were previously isolated or economically stagnated. This month, a new freight train service linked Warsaw with Ganzhou, the first linking eastern China’s Jiangxi Province with the European continent. A few days later, a new service linked the north-western Chinese province of Qinghai with the European part of Russia, with a terminal in Qolmud. This previously isolated town counts as the twentieth Chinese city on the Eurasian network, with many more anticipated to come.