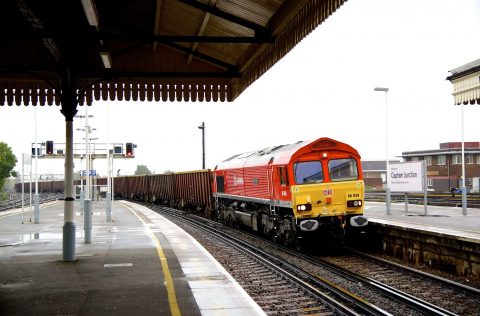 There has been an increase in the number of refugees that hide under freight trains to enter the country of arrival in the last few months. In Germany, police found hundred refugees in July alone while they captured a total of twenty refugees in the first half of 2017. In the first days of August, another twenty refugees were discovered on the border with Austria.

This week video images were released of refugees caught on the German-Austrian border. They were in bad health and probably hypothermic. The video raised the issue of human smuggling per freight train, but the problem is not new. “We regularly come across refugees hiding in freight trains across Europe and witnessed an increase since last year”, said Jelle Rebber, spokesperson of the DB Cargo Netherlands.

Germany is a common destination for refugees, but also in Austria and the Netherlands DB Cargo staff regularly comes across people hiding, in, on or under cargo trains. “Our trains cross most of Europe. Especially trains on the south-north corridor are targeted. They originate from countries like Italy and Greece and are heading for west or north Europe”, Rebbers said.

According to DB Cargo, intermodal trains are mostly targeted because they are relatively easy to get in to. “The semi-trailers have a soft cover, which  is easy to uncover with a knife. The cut is made on top and then recovered with duct-tape from the inside. In this way, nothing can be seen from the outside. These semi-trailers are a common transportation mode of freight across the Alps. They are however not safe for the transport of passengers. A person may fall off the train or be exposed to low temperatures”, Rebbers explained.

Target trains have been inspected more frequently since the increase in the number of refugees opting for this travel mode. Police and border security in Germany, Austria and Italy are working together in an effort to bring back the number of travelers on this risky journey. Recently, helicopters have applied infrared scanning techniques to spot the refugees from above.

DB Cargo has started an awareness campaign among its staff, explaining how they should respond when they discover refugees under a train. “We do not inspect the trains for refugees, but carry out regular technical inspections as a train arrives in a country. During these inspections, staff can come across refugees. We advise they call the train inspector or the local police, instead taking any action.”