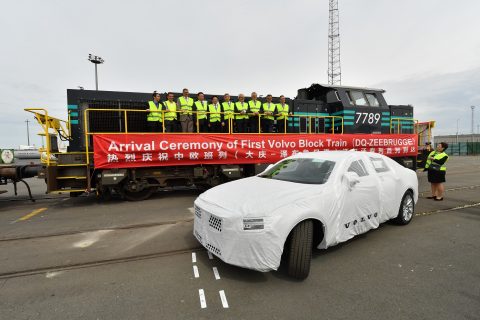 A fleet of Volvo cars which left China by train less than three weeks ago has arrived at the Port of Zeebrugge, marking another high-frequency rail freight service linking the Far East and Europe. It’s the result of an agreement signed recently between the port authority and the Changiju Logistics Group.

With a transit time of around 20 days, the service will operate four to six times a week. Some 24,000 S90 cars, worth a total of 600 million Euros, will be transported each year. The 9,832 kilometre journey began at Volvo’s manufacturing plant in Daqing, in Heilongjiang Province, China, before travelling through Russia, Belarus, Poland and Germany. It arrive at the port’s maritime station around on Friday June 30.

Each carriage had three containers, and each container held three cars at different angles in order to make optimum use of the available space. The containers were equipped with special attachments, ensuring the cars were immobilized during transit. Speaking at the launch of the service in China, Chris Peeters, Deputy Prime Minister of Belgium and Minister of Economy and Employment, said the ‘new era’ of in-depth co-operation between the two countries provided a ‘very good opportunity’.

Lineas, Belgium’s largest rail freight operator provided traction for the last stages of the service, and it said this latest project demonstrated rail’s suitability as a ‘truly competitive transport solution for long distances’: “As connecting through economic hubs is Lineas’ strength, the company was involved in this first transport – with our Green Xpress Network we already connect more than 10 economic hubs in Europe through quality and competitive direct rail connections that answer the needs of our clients,” said a spokesperson.

“However our services don’t stop at the European borders. As a rail freight operator with international ambitions we look into opportunities to provide competitive rail transport solutions to the growing international needs of industrial companies, also beyond Europe,” they added.

The Memorandum of Understanding signed between the port authority, Chiangjiu Logistics Group and China Development Bank was witnessed by Belgium’s Prime Minister, Charles Michel, and the Chinese Premier Keqiang Li. It is being seen as a valuable new marketing tool for the port, as it seeks to build new trading relationships with the Far East.

China Development Bank will provide finance to both Chinese export companies looking to establish European cargo operations at the Port of Zeebrugge, and to the Silk Road Platform Zeebrugge Project, which was jointly launched by the port authority, China COSCO Shipping Corporation and China Minmetals Corporation in October last year. It is designed to promote the flow of cargo between China and Europe via Zeebrugge.

The Port of Zeebrugge meanwhile has also launched a new online tool that gives port users access to a complete offer of direct and indirect intermodal connections. Port of Zeebrugge is the fifth port in Europe to use Ecorys’ ‘Intermodal Links’, which is the first independent, online search engine for the best and fastest intermodal service providers for container, ferry and roro transport between more than 1,000 terminals in 50 countries.

The planner determines the optimal route from 16,000 possible terminal connections offered by 150 service providers, including transport times and connection frequencies. The intermodal planner will provide port clients with a complete overview of rail, inland waterway and short sea operators in Europe and hand them a selection of the best intermodal connections between two locations.