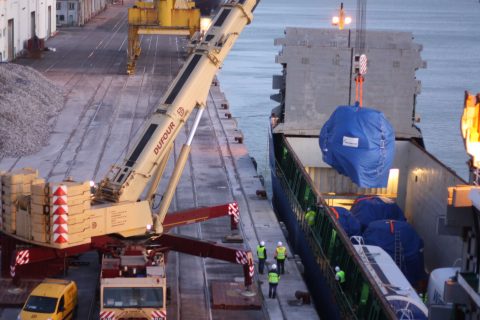 Rail freight users can now take advantage of a new 24/7 ‘smart’ storage area for unaccompanied trailers at the Port of Calais. The 1.5 million Euros project will save time for hauliers and give them peace of mind over security.

Featuring a new intelligent traffic management system, it is available to all multimodal transport companies for trailers travelling without tractor or driver. Equipped with a license plate reading system at the site’s entrance, this new equipment is entirely automated and accessible through a dedicated itinerary, open around-the-clock and separated from regular traffic flows.

The 10,500 square metre parking area for UK-bound traffic has been built close to the VIIA rail terminal, the starting point for the longest rail motorway in Europe. As the entry point between the UK and France, it is also a key section of the North Sea-Meditarranean EU TEN-T Freight Corridor.

Avoiding 1,200 km of roads, the VIIA Britanica enables hauliers to cross France in only 22 hours. Trains carry unaccompanied semi-trailers from Calais to Le Boulou, on the France-Spain border, six days a week. Each train is 680 metres long and is made up of 20 cars, with enough capacity for 40 semi-trailers. This service is operated by VIIA, a subsidiary of SNCF Logistics, and will move 40,000 semi-trailers from road to rail over the next five years. This will save 50,000 tonnes of CO2 per year – the same as eliminating 50 million lorry road kilometres per year.

Jean-Marc Puissesseau, CEO of Port Boulogne Calais, said: “The reorganisation and modernisation of the management of unaccompanied trailers prefigures the future modes of logistical management. Improved fluidity, traceability and security are the expressed needs of road haulage companies that we are dedicated to fulfilling.

“This new tool to support intermodality is essential in order to stimulate the adoption of transport and logistical modes ever more efficient and durable and which will be fully integrated in the future Calais Port infrastructure.”

Thanks to the new dedicated access route, transporters will no longer need to check in with maritime companies, nor at the border and security checkpoints, as these will be managed entirely by the Port Boulogne Calais during the shunting tot the cross-channel terminal.

The port said this new ‘e-modal’ facility acted as a single gathering of all the supply chain stakeholders, such as transport companies, border authorities and handlers. It made it possible to remotely control the entire booking process all the way to the boarding of unaccompanied trailers onto trains.

The facility has been made possible thanks to the financial support of the European Union through its BRIDGE project.