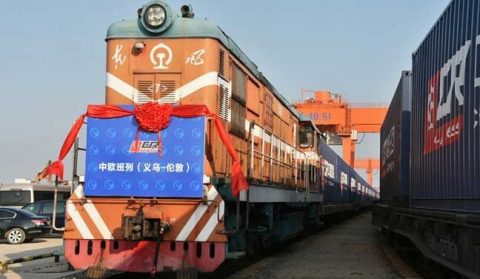 A new era of rail cargo services between Europe and China has been further underlined with the departure of the first London-bound train from China, and the promise of extra services to the Far East by German state operator Deutsche Bahn.

The first freight train between China and London is currently traveling some 12,000 kilometres across Eurasia after departing Zhejang Province on Sunday, said the China Railway Corporation (CRC).

Scheduled to take around 18 days, it will be mid-January before it reaches its destination of Barking Rail Freight Terminal in east London, and marks another symbolic move by the Chinese government in its continued push to improve its export network through enhanced worldwide – and especially with Europe – freight links.

The train’s journey began at China’s international commodity hub Yiwu, a well-established centre of production for small goods, and is carrying cargo including clothes, bags and suitcases, destined for European consumers.

Before its arrival in London, the train passes through Kazakhstan, Russia, Belarus, Poland, Germany, Belgium and France, state news agency Xinhua reported. London is the 15th European city to be added to China-Europe freight train services.

The CRC said the service will improve trade links between China and the UK and increase connectivity with western Europe, while at the same time further develop the ‘One Belt One Road Initiative’, a multi-million dollar infrastructure and trade network connecting Asia with Europe and Africa along ancient trade routes, namely the Silk Road.

Deutsche Bahn meanwhile has said it plans to significantly step up cargo transport to China following a record year, using the world’s longest train line in a modern-day revival of the Silk Road route.

More than 40,000 containers were transported between the two countries in 2016, up from 35,000 a year earlier, said a company statement. DB board member Ronald Pofalla said: “This is a good basis from which to increase the number of containers to about 100,000 by 2020.”

The Germany-China freight train service has already proved especially popular with clients who require urgent but cost-efficient deliveries such as manufacturers of clothing, electronics and car parts, according to DB. The line began operating in 2008, and Deutsche Bahn now has some 5,000 employees working in China through its freight subsidiary, DB Schenker China.

Now the company plans to double its services to China, and Jürgen Wilder, CEO of DB Cargo, said: “The constantly rising transport volumes of the trans-Eurasian land bridge demonstrate that railway has established itself as a competitive alternative to other modes of freight transport. I firmly believe that more customers will use rail services to transport their goods to and from China in the future.”

To put it into perspective, 40.000 containers are just over 4 MSC Oscar container vessels.

But at least about 400.000 ton airfreight, 25% of freight handled on Schiphol