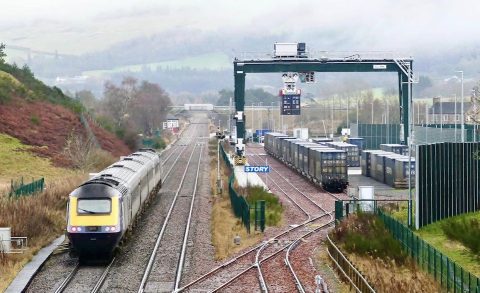 Companies within the Scottish rail industry supply chain have committed to recruiting five per cent of their workforce as apprentices, providing the right government support is in place. The challenge has been laid down by the Railway Industry Association (RIA) in front of Jenny Gilruth, the Scottish transport secretary.

Gilruth, a member of the Scottish Parliament for Mid Fife and Glenrothes, a constituency nearby the Levenmouth project to reinstate rail services to a neglected urban area, recently addressed the RIA Scotland annual conference in Edinburgh. Gilruth delivered a keynote speech in which she spoke about the important contribution the railway makes to decarbonisation, innovation and social value – all of which are priorities for the Holyrood government.

In Scotland, passenger railway operations are in public hands and operated via a holding company. The government’s agency Transport Scotland also works in partnership with Network Rail to maintain and develop the network. Only Anglo-Scottish passenger services are operated autonomously, along with open access operators (currently the Lumo operation on the East Coast, with the future possibility of Grand Union Trains from Stirling to London).

Freight services remain fully independent commercial operations. However, the Scottish government has demonstrated some enthusiasm for development, supporting projects like the recently opened Highland Spring terminal at Blackford. “RIA Scotland is right to maintain a clear focus on four key priorities: decarbonisation, skills, innovation and efficient delivery”, said Jenny Gilruth. “It was a pleasure to hear first-hand the collaborative way in which the rail supply sector works. These will be essential to providing a reliable, cost-effective, sustainable railway that’s fit for the future”.

Rail as a green investment

Rail suppliers said they wanted to achieve the target of employing 500 apprentices or have apprentices make up five per cent of their workforce but needed decision-makers to provide a clear pipeline of work and launch a programme to promote the diversity of jobs within the rail industry. “RIA Scotland members stand ready to use their expertise to make the Scottish rail investment programme greener and more efficient”, said Meirion Thomas, Chair of RIA Scotland.

In the presence of both Bill Reeve, Director of Rail at Transport Scotland and Alex Hynes, Managing Director of Scotland’s Railway, Meirion Thomas went on to say their members were able to offer better value for money to the taxpayer, make electrification cheaper and become more innovative with the right approach from Government. “We look forward to work with the Scottish Government, Transport Scotland, Network Rail and many others to deliver a successful, sustainable and vibrant railway industry in Scotland.”

Green of course, but not sufficient!
All other devices, those robust (resilient and redundant) add load capacity – for lower costs, etc.!
(For multimodal systems, now batteries (added tara) will be requested, at an electrified railway, proving robust, thus an hybride, etc., etc.)