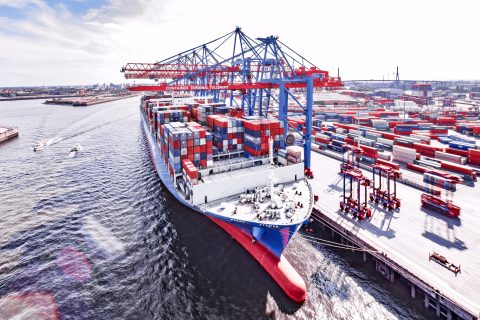 COSCO one step from purchasing share in container terminal Hamburg

Published on 13-01-2023 at 10:08
Handling of a COSCO container ship at Container Terminal Tollerort.Image: HHLA / Thies Rätzke

COSCO is close to finalising the deal to purchase a share of 24,9 per cent in the HHLA Container Terminal Tollerort (CTT). Hamburger Hafen und Logistik AG (HHLA) and CSPL, a subsidiary of COSCO, are currently in talks to clarify the final details and are aiming to finalise the transaction soon.

“We can confirm that in the objective, constructive talks between HHLA, CSPL and the Federal Ministry for Economic Affairs and Climate Action, it has been possible to agree on concrete conditions for CSPL’s participation in HHLA Container Terminal Tollerort GmbH”, an HHLA spokesperson stated.

Hamburg claims to have the biggest rail port in the world, with 50 million tonnes of goods transported by rail in 2021. The Container Terminal Tollerort has a total of five rail tracks and three cranes to load and unload trains.

The relationship between COSCO and the port of Hamburg took a decisive turn in September 2021, when the Chinese company started negotiations with the port of Hamburg shares of the CTT. COSCO initially was to purchase a share of 35 per cent in the terminal, but German politicians criticised the deal.

Especially members of the Green Party were fearing an increase in Chinese influence in Europe. “We should learn from mistakes, especially with regard to China, and not create new dependencies. I don’t understand that the Chancellery wants to push through the sale of the port of Hamburg against the criticism of all the ministries involved”, Green Party co-chair Ricarda Lang wrote on Twitter.

Even chancellor and former mayor of Hamburg Olaf Scholz got involved in the negotiations. The German government and the Chinese shipping company ultimately came to a compromise to lower the interest to a maximum of 24,9 per cent. The parties have agreed not to disclose the contents of the agreement.

“The Port of Hamburg remains public property”, mayor of Hamburg Peter Tschentscher stated in October. On their website, HHLA emphasises that they will retain sole control over all major decisions and COSCO will not receive any exclusivity rights. COSCO gains no access to strategic know-how and German law continues to apply in all matters.

In the meantime COSCO has sold its shares in the Duisburg Gateway Terminal (DGT) to the Duisport, the operator of the port of Duisburg. The share of the Chinese state-owned company in the terminal amounted to 30 per cent. The parties decided not to disclose the reasons behind COSCO’s exit.

The project for the DGT was launched in 2019 for a total investment of 100 million euros and is supposed to handle 850,000 TEUs per year when finished. The port of Duisburg plays an important role in Chinese trade in Europe, with over 30 daily trains coming from the New Silk Road.