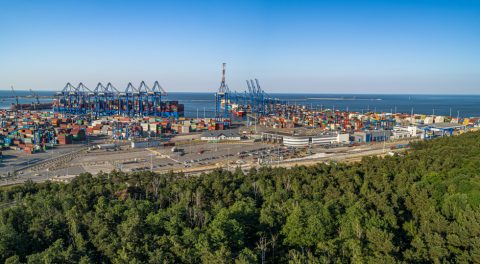 The Austrian crane manufacturer Kuenz has been chosen to supply Baltic Hub’s under-construction T3 terminal with 20 fully automated sideload stacking cranes. The company will deliver the order in cooperation with systems integrator ABB. The first deliveries of cranes will start in early 2024 and will be completed by the first half of 2025.

According to Kuenz, the T3 terminal project in Gdansk’s Baltic Hub is one of the largest orders in the company’s history, which will strengthen its position in the automated stacking cranes market in Europe.

“We selected Kuenz and its partner ABB for several reasons, such as their patented hoist and gantry design and tailored automation solution for Baltic Hub,” commented Mustafa Dogan, technical director at Baltic Hub. David Moosbrugger, general manager at Kuenz, also underlined that ABB and Kuenz’s tailor-made approach, according to Baltic Hub’s requirements, was the basis for winning such a large order.

As mentioned, the cranes are fully automatic. “They have a 32 metres span and two cantilevers of 8,5 metres in length each. The lifting height is one over six,” explained Kuenz.

Moreover, the cranes consist of a double girder gantry and a trolley incorporating some patented solutions. The trolley has a 4-drum hoist with direct outgoing ropes to the headblock. The headblock is equipped with micro-motion that allows fine positioning in the trolley and crane travel direction.

Kuenz’s partner ABB will supply the cranes with electrical equipment and automated technology consisting of 3D laser systems with cameras, which are the ones enabling automatic loading and unloading in the truck area and container stack.

If ‘Baltic Hub’ does not ring a bell, it should be noted that this is the new name of the company formerly known as Deepwater Container Terminal (DCT) Gdansk. The company rebranded in late October and chose the name Baltic Hub to signal the terminal’s ambitions to become the central hub in the Baltic region, both by sea and land.

The rebranding news coincided with the beginning of construction works at the terminal’s third deep-water quay (T3), which will boost its overall capacity. Once construction of T3 completes, the terminal will be able to handle the next generation of containerships arriving in the Baltic Sea.

The T3 project will include a 717 metres-long deep-water quay, with depths up to 17,5 metres and a yard area of 36,5 hectares. The new quay will open for operations in mid-2024 and be fully completed by the second quarter of 2025.