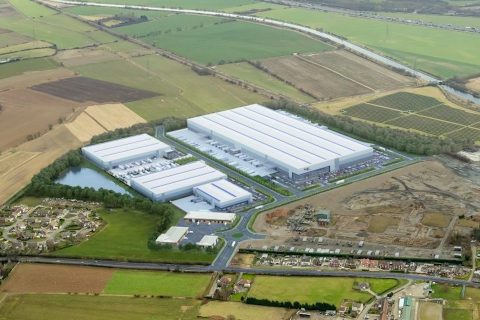 Trimodal site proposals in Yorkshire with rail in the sale

A large logistics hub is being planned for the site of Kellingley Colliery, the long-closed last deep coal mine in the UK, and a one-time mainstay of the local economy in this region of North Yorkshire. Rail freight is being promoted as part of the project’s appeal, although the developers admit that there is only outline planning permission in place for rail development, and no rail-based logistics feature in the slick video projection of the finished warehousing park. The developers say that the first units will be available by the end of next year.

Seven years after Kellingley, the last deep coal mine in the UK closed at this site, work is underway to regenerate the North Yorkshire location as “Konect62”. The promoters offer a logistics park, promoted as tri-modal, because of its position adjacent to the cross-Pennine M62 motorway, the Aire and Calder Navigation ship canal, and an existing railway line, to which the site was previously connected for coal traffic to a nearby power station. However, at present, only the road connections are under active development.

Rail freight potential is again being touted as a marketing tool for a logistics park development. This time it is for one in the north of Yorkshire, at a location that has so many ticks for economic and social regeneration it is surprising it does not itch. However, scratch beneath the surface of the Konect62 plans, and the prospects for rail and sea logistics are somewhat less certain than the road transport opportunities. The play on words in the project has it named for the M62 motorway, which links the Humber River port of Hull on the east coast, with Leeds, Manchester, and the west coast port of Liverpool. The developers do make mention of the convenience of nearby East Coast Main Line rail freight facilities at Doncaster and also at Wakefield.

What has been described as a “huge new tri-modal Yorkshire site” is the eventual aim of the 54 million-pound (63 million euro) land deal signed by a consortium of developers, headed up by Cole Waterhouse Real Estate and Henderson Park. If the developers are as good as their marketing, then the park would be a “future proof” logistics hub, connected by water, road and rail. It would emulate an equally ambitious development on the other side of the Pennines Mountains, at Salford, the potential of which has yet to be realised.

The project site is already bounded to the south by the existing Wakefield to Hull railway line, which is rather misunderstood in the glossy brochure as the “northern railway line”. In fairness, passenger services on the route are currently operated by Northern. “The wider Konect 62 park has already received outline planning approval for rail handling and freight use”, says the developers’ brochure. “Master planned to include a multi-modal rail hub, Konect 62 will enjoy low carbon containerised connections to inland and sea ports across the UK, also linking directly to Europe via the Channel Tunnel”, they say. “Having successfully secured the site last year, we are pleased to now be able to press ahead with the first phase to ensure the site is oven-ready for occupiers”, said Damian Flood, CEO at Cole Waterhouse, the co-promoters. “Enabling works are well underway and we are now working towards the first facilities, scheduled to reach sectional completion from Q3 to Q4 2023.”

There is a recognised shortage of warehouse and logistics handling infrastructure in the UK. There have been political calls for logistics handling to move further up the agenda, and for future developments to have a legislative requirement to include rail freight intermodal handling as an obligation. However, while the UK government has passed legislation requiring the economy to be ‘net-zero carbon’ by 2050, there appears to be little enthusiasm to encourage greater utilisation of rail in new logistics developments. That hasn’t stopped developers like those at Kellingley using rail as a marketing tool, even if that tool remains shiny and unused, at least for now.