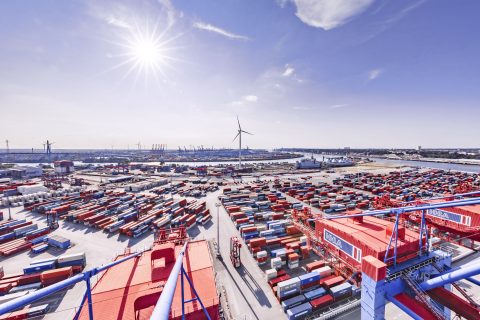 COSCO will enter Hamburg, but only as a minority shareholder

COSCO will only be allowed to buy 24,9 per cent of the shares of the Container Terminal Tollerort (CTT), in the port of Hamburg, so the German government has decided. The previous agreement involved COSCO acquiring 35 per cent of the CTT shares.

This way, Germany can make sure that the Chinese company remains a minority stakeholder in the terminal, as was reported by Politico. It now remains to be seen if this new deal will affect the plans to remodel the CTT. HHLA, which manages the terminal, declined to comment so far.

Controversies intensified last week, when it was revealed that Olaf Scholz, the German chancellor, was pushing the deal despite concerns from various ministries, especially the Ministry of Economic, Robert Habeck. Habeck fears that this transition would help China gain control over routes as well as crucial destination points, which is what the government wants to avoid.

Moreover, members of the European Parliament lamented that this deal shows Germany’s naivety with regards to China, as it was stated in Politico. Svenja Hahn, a member of the EP’s Renew Europe group and of the German Free Democrats pointed out that China does not allow foreign investors in its ports, but is however heavily investing in ports outside of its borders.

Recap of the story

The relationship between COSCO and the port of Hamburg took a decisive turn in September 2021, when the Chinese company started negotiations with the port of Hamburg to acquire 35 per cent of the shares of the CTT. More recently, COSCO postponed the deadline to finalise operations from September to the end October 2022, instigating the German government’s dismay.