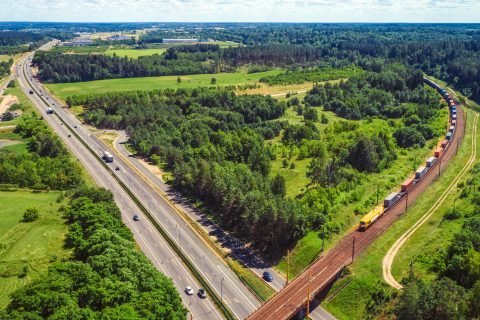 LTG closes Chinese office, signalling the end of an era

Lithuanian Railways (LTG) have officially commenced processes to close their representative office in China. The decision applies to the broader geopolitical context between the two countries in the last year and a half. Political tension between Lithuania and China resulted in a complete change in the Silk Road landscape and their bilateral rail connections since mid-2021. Now, LTG seems to be cutting the last remaining ties with China.

LTG will now focus on reaching the Far East via Kazakhstan while bypassing Russia. “We are talking with Kazakh companies about a project that could connect Lithuania with the Far East and Central Asia bypassing Russia,” said LTG CEO Egidijus Lazauskas. However, is LTG’s sole target bypassing Russia because of the war and sanctions? One could arguably say no.

LTG’s Chinese office closure indicates that Lithuanian Silk Road traffic is going through a crisis. Yet the war in Ukraine and the diversification of east/west traffic resulting from sanctions on Russia and Belarus is not the only reason. One could argue that this was the final blow to Lithuanian Silk Road connections.

Problems started much earlier. Specifically, the first clouds on Lithuania’s Eurasian business appeared in August 2021, more than a year ago, when its government openly confronted the Chinese on the matter of Taiwan. It was around that time that Lithuania and Taiwan announced their intention to strengthen their bonds by opening representative offices in each country. However, China was not pleased with the development and withdrew its ambassador from Lithuania while it called the Baltic state to do the same.

It didn’t take much time for the fragile diplomatic relations of Lithuania and China to impact Eurasian transport links. In just a few days, information about a stoppage of China trains heading to Lithuania started to make headlines. The two sides kept contradicting each other, with China claiming that politics would not affect rail transport and Lithuania claiming that it doesn’t receive Chinese trains anymore.

The truth was somewhere in the middle. Indeed, China-Europe trains did not stop transiting through Lithuania to Kaliningrad. Nevertheless, they no longer stopped on Lithuanian grounds, practically excluding Lithuania from the Silk Road. In the past, trains used to stop in Vilnius to load and unload containers. This was no option anymore since trains continued directly to Kaliningrad, with containers destined for the Lithuanian market getting unloaded at the border crossing between Lithuania and Kaliningrad and, from there, transported back to Vilnius by trucks.

With bilateral relations between the two countries on a tightrope and Lithuania not considered a Silk Road destination by China anymore, the situation remained stable for almost a year. That was until mid-August 2022, when China decided to stop cooperating with Lithuania in international transport and sanction any cooperation with the country in response to a Lithuanian official’s visit to Taiwan.

Industry specialists ensured that this would not affect the China-Europe trains to Kaliningrad, as it didn’t in the first place. However, combined with the traffic stoppage to and from Russia, China’s sanctioning of Lithuania seemed like the last straw in the country’s position on the Silk Road. It may not have impacted the already non-existent transport links, yet it signalled that this was officially the end.

LTG closing its China office might signal the end of an era. However, its executives see this as a new opportunity. On the one hand, the company focuses more on building closer ties within the European market and with Ukraine.

On the other, it sees Kazakhstan as its new gateway to reach the Far East and Central Asia. Will this strategy be successful? The approach is interesting enough from a route perspective. How will Eurasian trains transit between Lithuania and Kazakhstan with the Russian route blocked? Will LTG Cargo Polska and LTG Cargo Ukraine play a role in moving cargo towards the Black Sea and from there via the Middle Corridor to Kazakhstan? These are some questions worth following up on.