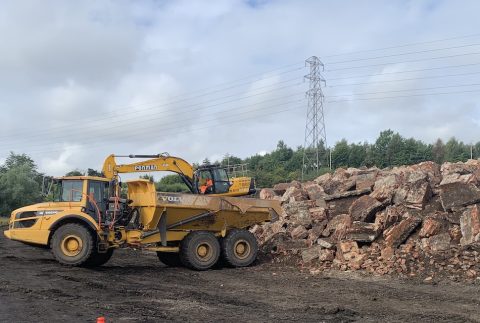 Removing the platform at a former halt has cleared the way for double tracking at Cameron Bridge on the Levenmouth project, a new line for communities in the east of Scotland. Critically, the demolition of the redundant passenger station opens up the prospect of reconnecting freight to adjacent industrial installations. There are hopes that the new line will be the forerunner of many similar new installations in Scotland and elsewhere in the UK.

Scotland’s Railway, the partnership between Network Rail and the devolved government, has made progress on its project to reopen the branch line into the Fife communities of Levenmouth, one of the biggest urban areas currently unserved by rail. Work to demolish the old station platforms at Cameron Bridge is now complete, making possible work on a new station for the community. The 5000 tonnes of masonry and spoil will be recycled elsewhere in the construction phase.

Following the successful completion of the first mile in March and significant progress on the second mile, the removal of the old platforms of the former Cameron Bridge station clears the way for the next stages of track work. The new railway is breaking the mould for restoration and reinstatement. Unlike recent projects in Scotland, such as the Alloa branch and the highly popular Borders Railway, the line will be double-tracked and electrified, optimising the capacity of the five-mile (8km) line.

The old platforms adjacent to the Diageo distillery and factory were 210 metres in length and made up of masonry and fill materials totalling approximately 5000 tonnes. Their removal was needed to clear the way for the double-track railway, which will reconnect Leven to the mainline rail network.

Opportunities in freight and tourist connections

The demolished platform material will be retained onsite and, fittingly, will be used as infill for the new Cameron Bridge station platforms, which are being built 200 metres to the east of the former site, to serve the modern community better. “The project team is keen to reiterate the message that local people should not now be using the area for their own safety to avoid coming into contact with engineering trains, railway plant and machinery delivering the work”, said the project team. “Our priority is safety, both of the local people and for those working hard to deliver the project, and the best way to promote safety is by now asking local people not to continue to use the railway corridor.”

Although passenger services were withdrawn from the Levenmouth branch in 1969, freight traffic continued to serve customers until 2015. The line formerly served a now decommissioned power station, a dockyard, and the distillery at Cameron Bridge, of which the distillery, now operated by Diageo, is the only remaining industry with potential for rail connection. Network Rail, who are delivering the 116 million pound (138 million euro) project, say they are planning for opportunities in freight and tourist connections. Campaigners would like to see those connections extended to the famous golf resort of St Andrews, where another movement aims to see that community also reconnected to the network.

It would take a gigantic to push to get these companies to return to rail ! ( Subsidies? Grants ?). Why did they leave rail in the first place and switch to road? The end of Speedlink? Constant strikes? ( still a serious problem today but the unions don’t realise they are killing Rail freight or don’t care!). But we live in hope !