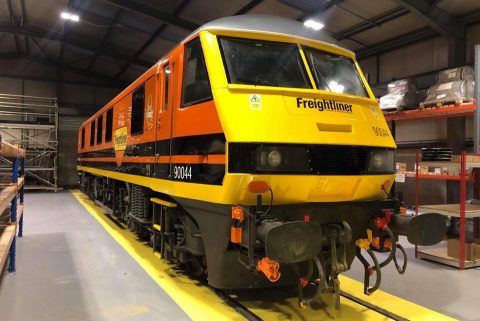 UK electric hauled freight has shown little change over the past ten years. That’s according to new figures just released by the Office of Rail and Road, the government-appointed independent watchdog. In terms of weight and distance, the amount of electric rail freight activity over the last decade has actually decreased. However, that headline has to be taken into a wider picture that shows an overall decline, regardless of the traction at the head of the train.

Rail freight has inevitably been dominated by diesel traction for over half a century. Investment by operators in outright electric traction, and lately in alternative and hybrid locomotives, has given the sector a greener outlook. Nevertheless, the statistics show little difference in the tonne-kilometres moved under the pantograph. Over the last ten years, there has actually been a fall. The reasons may be down to a more general shift in economic activity, and a change in demand for rail freight resources.

The eagerly awaited quarterly review from the Office of Rail and Road (ORR) serves as a bellwether for the UK rail freight industry. Who’s carrying what has long been the staple diet of the review. However, in the current data set, there’s a new parameter. For the first time, the ORR has included with its review a closer look at the tractive effort at the head of the train. It’s an interesting insight into the greening of the industry, and gives some intriguing results.

It will surprise no one that diesel is still the dominant means of moving freight in the UK. While every operator is quick to point out that rail freight, including diesel, represents by far the most ecological way to move freight around the country, it may surprise more than a few observers to discover that despite significant efforts to diversify away from fossil fuel, electric traction has yet to make any significant dent in the dominance of diesel.

The heavier the load, the more effort to move it. So the parameter that combines weight and distance, the “tonne-kilometre” measure, says exactly how hard the rail freight industry is working, and also provides a pointer to the economic activity of the country overall. Of course, there’s more behind the numbers than that.

The figures from the ORR reveal that the last decade has seen little overall change in the absolute tonnage moved by rail freight. Ten years ago, in 2012, it was around 41 million tonne-kilometres. Now, that headline figure is down to 34mtk. No prizes are offered for solving that conundrum. The collapse of the coal industry has taken that heavy load out of the market. No prizes either for guessing that the inexorable rise in intermodal has taken up the slack. Aggregates may be fashionable, but the tonnage is not quite in the same league as the black gold.

No wholesale modal shift just yet

Less coal, more containers sounds like a modernising economy. In that scenario, it also sounds like an ideal opportunity for a more modern traction proposition. Yet, over the past ten years, there has not been quite the transformation that might be expected.

In 2012, with a smaller fleet, the rail freight industry was moving an impressive 4.38mtk by electric traction. Back then, the expectation was that wholesale modal shift would see a swift move to electric power. That has yet to happen in any significant terms. The economics of rail freight locomotives have still to take effect. The upshot of that is that the total moved in the past twelve months, under the wires, is 3.87mtk. That isn’t a low-point – in fact it represents a median figure for the ten years, and compares with a historical near-high in 2012.

The good news it that electric traction figures are improving. Bar the pandemic years, they have shown a steady annual increase for the past five years. Diesel still out performs electric – by a significant factor of around nine to one. However, the trend is different, with diesel haulage remaining static for most of the past decade. There was an obvious and significant drop in 2015-16, coincident with the precipitous fall in coal traffic.

Diesel still accounts for an annual 30mtk. There’s no reason to assume that figure will take another seven million tonne-kilometres hit in any one year, but the boffins of the rail freight industry predict a managed decline towards a net-zero economy, but chief financial officers will be looking at the asset value of their diesel fleets. The written down value of that fleet suggests a happy meeting of due renewals and the mandated target dates for net-zero by 2050. Perhaps the statistics don’t lie after all.

Electrification, yes, but a sustainable!
(With new technique, hybrid, etc. options already are present, for one of needed shifts.)
At transports, quality matters, now more than ever. Resilent, redundant, robust devices, handsomely are rewarded – and vice versa.
For clients (for all of us…) now safe “eta” is a must!
Suboptimations, optimal when steam was shifted out, no longer are…
The safest and most energy effective device, shall not be obstructed, for sake of some parts!