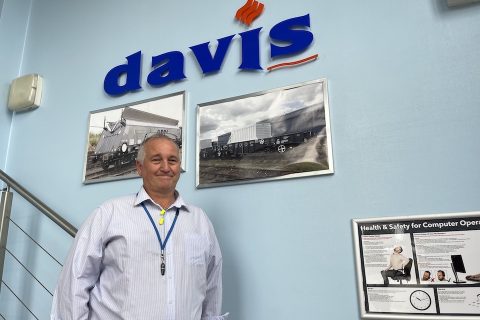 One hundred and fourteen years old and still going strong. That is WH Davis, the specialist wagon manufacturers, not the age of Les Bryant, their energetic group Engineering Director. Nevertheless, with forty-four years of experience covering six decades since the 1970s, across both passenger and freight industries, Bryant has seen plenty of change, including eight prime ministers, up to the departed Boris Johnson. Now with a ninth incumbent of the Bryant era installed in Downing Street, the lifelong railwayman is anticipating yet more change.

WH Davis has outlasted the entirety of the UK wagon manufacturing sector, and Les Bryant has seen it all come and go. The radical changes between Jim Callaghan’s premiership and the first day of the Liz Truss administration have seen the manufacturing landscape radically changed. Whether that has been for good or bad, Les Bryant is aware that his company has a strategic role to play, possibly more important now than ever before.

Uncertainty over government policy has been an issue for many sectors, including wagon building. Will there be a wholesale revision of transport policy? With an imbalance and a contradiction between political aims for decarbonisation but with a continued commitment to road development, Les is concerned that a definite plan for rail is, once again, being overlooked.

“Documents like the Williams-Shapps report pay very little attention to the detail of rail freight operations”, he says. “The report leaves the industry to find its own future. There is a commitment for GBR [Great British Railways – the incoming management agency that will supersede Network Rail] to promote rail freight, but what does that really mean, and what will that amount to? I do feel that the freight industry is the forgotten part of the rail sector in political terms. If a freight operator were to go bust today, the government would not step in and move the trains tomorrow. We all know that’s a scenario that would not be tolerated in the passenger sector. Freight is not given the same priority nor ministerial attention.”

Although not officially the new prime minister until appointed by The Queen at Balmoral on Tuesday, Liz Truss has already convinced members of her own political party that she is the right person for the job. However, she will still have to do much more to convince Les Bryant that her government has a grasp of the rail freight sector’s challenges and the will to address them.

“We literally are left to run like second-class citizens. Whenever there is talk about any reform in the rail industry, freight is always an afterthought,” says Bryant. Looking at the recent campaigns to reopen lost railway lines, Bryant is well aware that the emphasis has been very much on restoring passenger services. “The reason for that is obvious”, he says. “Passengers vote, and freight wagons do not.”

Political change has been a fact of life throughout Bryant’s career. Now, with the likelihood of a significant reorganisation of government posts and policies, Bryant is prepared to see more change in the coming months. The inevitable cabinet reshuffles, and even the possibility of a snap general election this winter, cast some uncertainty over the industry at large.

However, Bryant has seen more changes than most in his career, and WH Davis has ridden them all out. From the deeply recession-hit decade of the eighties to the boom and bust of the early years of this century, nothing has shaken his commitment to his work, which he freely admits is his life and passion.

The wagon manufacturing sector was once a mainstay of the UK economy and a significant international trade generator. Now, even though there is just this one specialist company remaining, WH Davis fulfils a different but equally important national role.

“Do we need to expand, do we need to build a bigger facility to we need to increase our capacity? We need to ask ourselves what is the demand from the freight wagon sector in the UK and will the industry support any expansion by WH Davis. Is it two hundred, five hundred wagons a year, maybe even a thousand? Nobody really knows. You could gear up to meet that projected demand one year and find ourselves idle in the following year.”

“There was a time when I was working with companies that were placing orders with European manufacturers for thousands of wagons in a single contract”, says Bryant. “For us, at WH Davis, our capacity is to produce one hundred and fifty, perhaps two hundred specialist wagons a year. We currently do not seek to compete with the production of huge runs of standard wagons, nor do our customers seek a manufacturer who produces that volume and that standardisation.”

Demonstrating the point, WH Davis is at work on a contract for the British nuclear decommissioning agency, producing critical containment vessels for transporting low-level atomic waste. The task would be low volume for a mass-market manufacturer, but the challenging specification and quality control are ideally suited to the workforce and the set-up at Langwith Junction. No matter the political landscape, WH Davis hope to be active for many years to come.