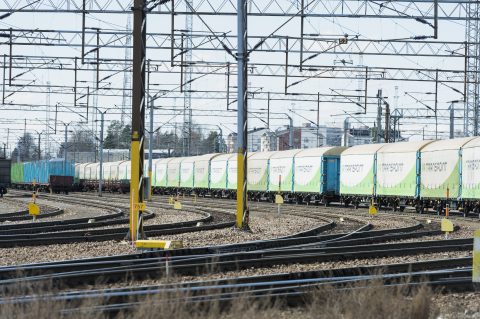 Finnish state-controlled rail company VR Group is racing to terminate transport agreements with customers on the Russian route. The company sped up the gradual phase-out of traffic to and from Russia and started concluding agreements on Tuesday, 3 May.

“We estimate that traffic will decrease to about one-third of the original level by the end of the summer. Some customers want to continue traffic until the end of the notice period, but we will continue negotiations to stop traffic faster”, said VR’s CEO Topi Simola. Initially, VR had shared that the traffic to and from Russia would stop after transport contracts expired.

However, now the company aims to terminate them even faster. Since the decision is not affected by the Western sanctions imposed on Russia, the termination of agreements with customers needs to take place individually and through consultation if contracts are to be concluded earlier than expected.

It should be noted that VR Group announced the gradual stoppage of eastern traffic on 6 April. Private companies and operators are also affected by the decision since, without VR, crossing the border and using equipment becomes more complex.

Agreement with RZD to expire

“Depending on the customer, the traffic can be stopped immediately if the customer agrees. “Terminations have already been initiated, and traffic will altogether discontinue by the end of the year at the latest. The agreements with the Russian Railways (RZD) will expire simultaneously with the cessation of traffic”, explained VR.

This means that agreements with Russian railways cannot be terminated before the contract expires. This is not the case for other companies, and VR wants to use this opportunity to get rid of as many contracts as possible and fast. This practice resembles Lithuanian Railways’ approach to terminating transport agreements with Belarusian fertiliser companies. The company was not forced by the US sanctions to do so; however, it decided to follow them and terminate contracts before their expiration.

Divesting from associated companies in Russia

VR will also implement a divestment strategy for associated companies and subsidiaries active in Russia. “VR Group has also started negotiations on the sale or downsizing of its holdings in its Finnish-associated companies ContainerTrans Scandinavia (CTS) and Freight One Scandinavia (FOS). In addition, VR Group has started negotiations on the sale of its Russian subsidiary Finnlog”, said the company.

For the record, and according to VR, “CTS is a company that provides container transport and forwarding services between Finland and Russia and other CIS countries and Asia, of which VR owns 50 per cent and JSC TransContainer 50 per cent. FOS is a logistics company specialising in freight, and full train shipments between Finland, Russia and the CIS countries, of which VR owns 50 per cent and JSC Freight One (PGK) owns 50 per cent. Finnlog is VR’s Russian subsidiary, which has leased wagons to VR Transpoint’s key Finnish customers and operated wagons in imported timber traffic between Russia and Finland.”