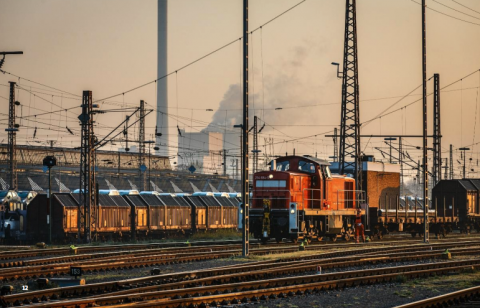 DB Cargo closed the 2021 fiscal year with a massive pre-tax loss (EBIT) of 481 million euros. This is evident from the annual figures of parent holding company Deutsche Bahn (DB). The deep red figures of the rail freight subsidiary contrast sharply with the result of logistics sister company DB Schenker, which managed to post a generous operating profit of 1,2 billion euros in the past fiscal year.

It has now been more than six years since DB Cargo last managed to write black figures. Since 2015, the rail freight company has now made parent holding company Deutsche Bahn (DB) around 2,5 billion euros in losses, with the last low point being 2020 when a deficit of 728 million euros had to be credited to the profit and loss account.

The arrival of Sigrid Nikutta four years ago at DB Cargo did not end that series of losses, although she managed to reduce them by more than 30% last year compared to 2020. This is why she was entrusted with five more years in driving DB cargo towards financial growth.

Nevertheless, the rail freight business remains unprofitable and is a source of concern for DB’s stock market analysts. At the presentation of DB’s annual results, they pointed out that DB Cargo’s loss for the first half of 2021 (-200 million euros) only increased in the second half, while the last months of the fiscal year are always logistically the most lucrative.

Nikutta had targeted a 10 per cent growth in volume last year but fell significantly short of this with an increase of 6,3 per cent to 226,5 million tons. At nearly 4,2 billion euros (8,8 per cent), the turnover came closer to the targets set. The number of ton-kilometres (+8 per cent) was also on the rise but did not reach pre-pandemic levels. In addition, the number of freight trains per day was increased. According to the annual figures, this resulted in a growth of almost 5 per cent.

Among other things, DB Cargo’s top management is committed to providing better and more reliable services, combined with a more significant role as a logistics provider, offering road transport in addition to single wagon loads. DB Cargo saw growth opportunities last year, as many shippers could reduce their CO2 emissions with combined transport. However, last year’s prolonged strikes among freight drivers thwarted some of those plans.

DB chief executive Richard Lutz expressed satisfaction with the developments at DB Cargo last year despite the losses. According to Lutz, the subsidiary is developing in the right direction and more and more new customers are knocking on its door to have goods transported by rail. He specifically mentioned DB Cargo’s talks with the German postal service to get more mail and packages onto DB Cargo’s trains.

The big problem at DB Cargo, according to Lutz, remains the single wagonload traffic. This is still a heavily loss-making segment, but Lutz expects a ‘renaissance’ and improved results, including further automation and digitalisation. “In the meantime, we still need support”, said the head of DB, referring to additional financial support from the German state.

A prognosis for when DB Cargo will become profitable is difficult for DB, especially considering the uncertain market conditions after the corona crisis and the current war in Ukraine. However, the goal remains for DB Cargo to return to profit in four to five years, according to the state-owned company. Among other things, DB pointed out that the German rail freight operator is still a significant market player in container transport to and from the major seaports (Hamburg, Rotterdam and Antwerp) and the transport of bulk goods such as coal, steel, building materials and chemicals.

This article was originally published in our sister publication NT.nl.