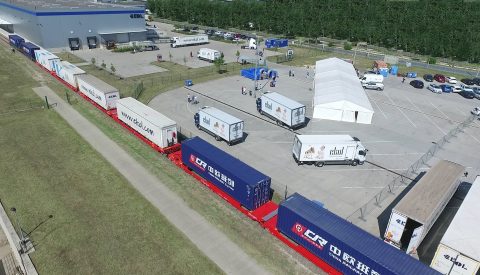 One of the facilities of Ekol Logistics Ukraine has been destroyed during a bombardment in Kyiv. There were no casualties, but the building has been devastated. It concerns the office in Stoyanka. This was reported by several media outlets.

Although it was not officially announced by Ekol, the Turkey-based logistics firm did respond to a post on Linkedin about the news. In this response it writes: “It saddens us as much as anyone else that such unfortunate events happen in this day and age. We continue to communicate with the Ekolians in Ukraine, understand their needs and provide the necessary support.”

Ekol is originally a Turkish company, but entered the Ukrainian market in 2012. Here, it has three offices, one in Kyiv and two in Kyiv Oblast. The office that was hit by the bombing was situated in Kyiv Oblast.

As a logistics firm, it covers a wide spectrum of transport solutions, among which rail freight services. In Ukraine, it has warehouses with a total capacity of 55,000 square meters; trailers, trucks, and other vehicles; and over 680 professional employees experienced in logistics.