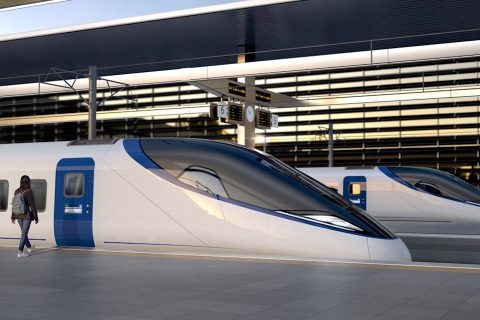 Britain’s HS2 high-speed rail project will be debated in parliament shortly. The Bill (the parliamentary proposal for debate) has been laid before the House of Commons, the start of the official procedure for finalising the project into an Act of Parliament. The Bill proposes for extension from Birmingham to join the busy West Coast Main Line at Crewe, and for a line to run to Manchester, with a terminus in the city centre, adjacent to the existing Piccadilly station, possibly on the site of the former Mayfield goods terminal.

The UK Government is anxious to see the project push on to Manchester and Crewe, after the recent cancellation of the so-called Eastern leg to Nottingham, Sheffield, Leeds and a connection to the East Coast Main Line. Today’s announcements, while welcomed in the North West, have drawn criticism from the areas left out after that cancellation. As for the actual building works, there is also considerable resistance to the project on social and environmental grounds – similar to the controversy over the building of the line through the countryside immediately north of London.

HS Two Parts to the Story

While to UK Government has been roundly criticised for cancelling the Eastern Leg of HS2, and then ‘re-announcing’ other rail projects in the north of England (which many commentators claim are piece-meal and insufficient to meet demand – particularly from freight), the company building HS2 has been getting on with the job. Now they are tasked with building another 52 miles (84km) of high speed line, which they say is a huge boost to the UK economy.

“Construction of the first phase of HS2 is already supporting over 20,000 jobs and spearheading investment and growth in major population centres along the route”, said Mark Thurston, their CEO. “This Bill is a vote of confidence in HS2’s ability to help towns and cities in the North realise their economic potential.”

The HS2 company has continued to promote the project as a capacity enhancement for the entire UK network. They have made repeated arguements for the benefits to rail freight – particualrly freeing up capacity on the West Coast Main Line, currently the busiest mixed-use route in Europe.

Monday’s announcement was coupled with confirmation of the UK Government’s HS2 Minister Andrew Stephenson’s decision to include plans for a rolling stock depot north of Crewe and a smaller depot and train stabling facilities in Dumfries and Galloway region of Scotland. The depots, say HS2 Ltd, would support the creation of hundreds of permanent skilled jobs.

However, many business leaders in the areas left out of the cut-back project – particularly those based in the Midlands and North of England, remain unconvinced and angry that the project is missing out their regions.