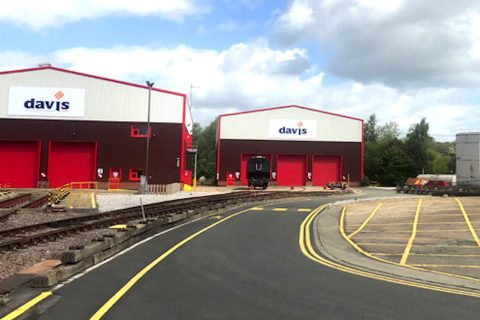 Britain’s independent freight rolling stock manufacturer WH Davis has been awarded a contract with Network Rail to improve the environmental performance of the infrastructure agency’s fleet of side-tipping ballast wagons. The company has also been part of a consortium that has revived a decades-long relationship with Bangladesh railways.

The award from Network Rail comes as little surprise to industry watchers. Having an enviable reputation for specialist and bespoke manufacturing helped WH Davis in their recent contact wins. The company has been a go-to supplier for the rail freight industry in the UK for some time. Still, there has been some celebration at the news of WH Davis being involved in the consortium that has put together a deal to support railway operations in Bangladesh.

Les Bryant, the Group Engineering Director at WH Davis Group, said that Network Rail had chosen the company to upgrade a vital part of their maintenance fleet. Their innovative approach clearly played a positive role in the contract decision. “WH Davis has been awarded the contract by Network Rail to develop a dust suppression system for fitting to ten rakes of side tippers”, he said. “The system will allow ballast to be damped down before discharge, so reducing the dust into the local atmosphere.”

Environmental performance is increasingly important, so the fitting of dust suppression – which will help avoid particulate contamination in the atmosphere around track works – is being heralded as a significant improvement. Assisting WHD on this project will be the UK operation of technical services specialists TUV Rheinland, based in nearby Nottingham, and Cotswold Fluid Power, the specialists in the design, manufacture and supply of fluid power components. “WHD are looking forward to working with our customer, [rail civil engineering firm] NWR, on this specialist project.”

WH Davis made the announcement on the back of a visit to their Mansfield manufacturing base by a party from Bangladesh. “WH Davis welcomed delegates from the Bangladesh Ministry of Railways, including the Bangladeshi Railway Minister”, said Bryant. “This visit was part of a five-day tour of a small number of UK companies who have formed a consortium for major new rail projects in Bangladesh.”

The party was photographed with an example of the ‘Megaboxes‘ under construction for their customer Beacon Rail. The 75cu meter capacity wagons are destined to meet the UK’s growing demand for bulk materials transport. WH Davis has a long-standing relationship with Dhaka. The minister noted that WH Davis had built wagons in 1980 for Bangladesh Railways. “We look forward to working with a consortium of prestige UK businesses on this project”, noted Bryant.