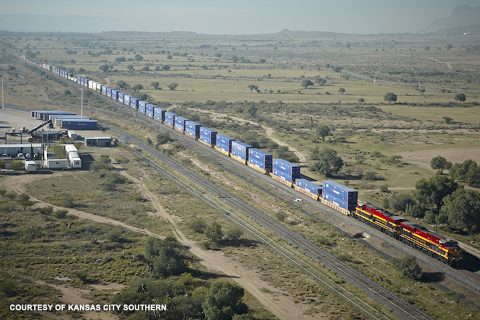 Total intermodal volumes rose 20,4 per cent year-on-year in the second quarter of 2021, according to the Intermodal Association of North America. Their Intermodal Quarterly report shows that international container movements rose 24,8 per cent from 2020, while domestic shipments were up 15,7 per cent for the same period. Meanwhile, ports on both coastlines, from Baltimore to Long Beach, reported record backlogs of containers stacked up in the quaysides.

The Intermodal Association of North America, which represents more than 1,000 corporate members, has reported a record surge in traffic over the most recent survey quarter. The interruption of the global supply chain – primarily caused by the pandemic – has left American ports with mountains of containers awaiting delivery or repatriation. That has contributed to excess movements, much of which has been taken up by the vast US rail freight network.

The traffic growth has remained unabated for over a year, says the latest IANA report. All three sectors measured – domestic, international, and adapted special purpose units (such as mobile offices) – were all on an upward trend. “Intermodal volumes have now grown for the fourth consecutive quarter”, observes Joni Casey, the association president and CEO. “What is noteworthy is the breadth of the gains”, he said. “With one or two exceptions, the three market segments showed positive performance in all of IANA’s ten regions.”

The seven highest-density trade corridors in North America, which collectively handle more than 60 per cent of total volume, were all up “double digits” in the second quarter. “Trans-Canada led with 29.6 per cent, followed by the Southeast-Southwest at 28.9 per cent and the Midwest-Northwest at 26.6 per cent”, says the report. These numbers translate into the vast volumes moved around the continent and have given rise to many more double-stack container trains, moving payloads that dwarf the European standards.

While the popular image of American commercial logistics is a long-distance trucker, the reality is somewhat more balanced toward rail freight. In fact, comparisons with the European continent, particularly the UK, are cause for consideration on the east side of the Atlantic. Almost a quarter of intermodal traffic in North America is moved by rail – amounting to 17 million movements (the road figure is 60 million over generally shorter distances. Internationally, a quite impressive 63 million TEU pass through North American ports annually, according to IANA.

Recent proposals by the new American government would make freight more responsible for rail operations overall, holding companies to account for delays to passenger traffic. That may well alter the balance of power in North America for over half a century and force greeter cooperation between operators and the industry at large. IANA’s membership embraces more than 1,000 corporate members, including rail freight operators, road transport, ocean carriers, ports, intermodal truckers and over-the-road highway carriers, intermodal marketing and logistic companies, and suppliers to the industry.