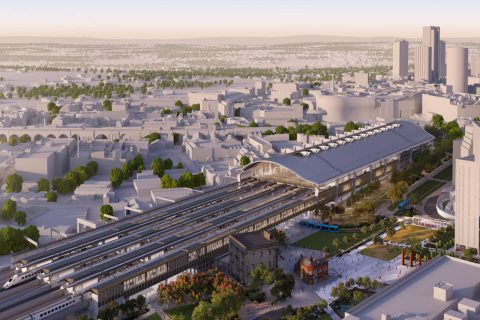 The Department for Transport has strongly denied claims that the UK parliament has been misled over the massive HS2 high-speed rail project costs. The serious accusations come from the former deputy-head of a wide-ranging review into the project, Lord Tony Berkeley.

Lord Tony Berkeley, appointed deputy-head of a UK government review of the HS2 project – and then disagreed with the findings and resigned – has said the project only received Royal Assent (official approval) because the government of the day misled parliament over the eventual estimated costs. The government’s Department for Transport has refuted the claims, and the company responsible for building the railway, HS2 Limited, has distanced itself from the political crossfire.

An investigation has been demanded by the socialist parliamentarian Lord Tony Berkeley. He says that the true expected costs of the HS2 project were deliberately withheld from the House of Commons – so that the act of parliament required to approve the project would stand a better chance of receiving a favourable vote, and therefore the constitutional necessity of the Queen’s signature. Lord Berkeley, the British aristocrat, sits in the House of Lords, the upper house of the UK parliament. He was deputy chair of the so-called Oakervee Report but resigned amid ferocious disagreement over the content.

Lord Berkeley has written to the senior civil servant and cabinet secretary Simon Case, demanding an investigation into his allegations that parliament was misled over HS2 costs. UK parliamentary rules – the ministerial code – forbid what Tony Berkeley calls “failing to give accurate and truthful information to parliament”.

Half a million jobs supported

The accusations aimed at the political conduct of the government come as construction continues on the project. Under the management of HS2 Limited, the engineering project is advancing on several sites on the 109-miles (176 kilometres) between London and Birmingham. The project will release capacity on the West Coast Main Line, currently Europe’s busiest mixed-traffic route.

“Construction of HS2 is well underway, playing a vital role in Britain’s economic recovery from the pandemic”, said an HS2 spokesperson. “Major tunnelling has already started, and over 16,000 people are working on the project.” HS2 add that the project, once complete, will support 500,000 British jobs, boost rail capacity and better connect the country, particularly in towns and cities across the Midlands and the North. “By providing a cleaner, greener way to travel, HS2 will also help reduce the number of cars and lorries on our roads, cut demand for domestic flights and help the country tackle climate change”, they added.

While the engineering efforts of the HS2 company are not called into question, Lord Berkeley takes issue with the stated costs and the conduct of Boris Johnson. “It is clear that the prime minister, his predecessors and other ministers were made aware of the probable outturn cost, but none chose to inform parliament when it was considering the HS2 phase one bill before it received Royal Assent on 23 February 2017”, says Berkeley in his letter, which demands an investigation. “Nor did the present prime minister share the information with parliament or with the Oakervee Review in 2019”, he adds – implying he was personally kept in the dark. Berkeley claims the true costs of HS2 have risen to 142 billion pounds (167 billion euros) in 2015 prices.

HS2 Limited, for their part, make very clear their understanding of the costs of the project. In a statement to RailFreight.com, the company says that Phase One (principally the London-Birmingham route) has a funding envelope of 45 billion pounds (53 billion euros) at 2019 prices. These figures – which all include contingency margins, have been agreed by the Department for Transport and the UK Treasury. The estimated cost for Phase 2a (Birmingham to Crewe and the West Coast Main Line) is 7 billion pounds, and the cost of 2b (onwards to Manchester) will depend on the government’s current work on the Integrated Rail Plan. The estimate of the full Y network (including the eastern leg to Sheffield and Leeds), as previously planned, is £72-£98 billion in 2019 prices. These figures have been scrutinised by HS2 Ltd and the DfT through the Chairman’s stocktake in 2019 and were then further scrutinised by the Oakervee review, the National Audit Office, The Public Accounts Committee and Treasury. HS2 reports on these numbers every six months to Parliament

Lord Berkeley concludes that the cost for HS2 has risen from what he contests was approximately 34 billion pounds (40 billion euros) to closer to 98 billion pounds (116 billion euros) today. “I, therefore, conclude that the HS2 phase 1 bill received Royal Assent only because ministers misled parliament multiple times, either by omission or misinformation and that this misleading has continued with phase 2a – for a project now expected to be ten times the original estimate.”

For its part, the DfT told RailFreight.com that the costs had been made public, and most recently as 2021. “In February last year, this Government reset HS2 and established a realistic budget, strengthened oversight and increased transparency”, said a spokesperson. “As part of this, ministers now report to Parliament on progress every six months, including on costs and schedule. The decisions taken in 2015 and 2019 were made by previous governments. Choices on the scope, timing and cost of the project remained open at the time.”

Lord Berkeleys letter was to Simon Case the Cabinet Sec & yet all your ‘reply’ info. seems to come from the DfT/HS2 Ltd, the very people that Lord Berkeley is accusing of parliamentary misconduct.

In fact I would not be surprised if Simon Case does not get ‘sloping shoulders’ & dump the problem, & get the DfT to answer Lord Berkeley, which would really be allowing the DfT to ‘mark its own homework’.

In my opinion the real problem for the escalating costs has been the ridiculous lengths the project leaders have gone to to reduce environmental impact on adjacent properties including expensive tunnels and cuttings to prevent trains being seen and heard by nearby property owners. No such lengths are gone to on major road schemes even though trains at high speed are relatively quiet and much less polluting.