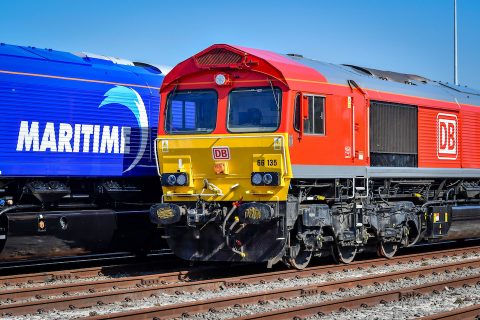 The fast-growing integrated road and rail logistics operator Maritime has taken on the management of its first rail terminal outside England. The Derby-headquartered company has agreed on a lease with DB Cargo UK to take over operations at Mossend EuroTerminal, near Glasgow. The acquisition is the sixth rail terminal to come under Maritime’s management, despite the company being better known for its large and distinctive road truck fleet.

Mossend is a good fit for its new operators. The North Lanarkshire depot provides intermodal freight transfer between rail and road. It is well-placed at the centre of Scotland’s road network, next to the M8 motorway linking Glasgow and Edinburgh, the two biggest markets in the north of the UK.

Operationally, Mossend also plays a crucial role. It allows facilities for changing between diesel and electric traction. Intermodal services using the West Coast Main Line generally run under electric traction but require diesel locomotives to operate over most internal Scottish routes. The facility is at the heart of a cluster of rail freight developments.

Speaking about the management transfer, DB Cargo UK Chief Executive Andrea Rossi said the deal builds on the success of relations between the two companies. “Since 2018, our existing relationship with Maritime has quickly established itself as a major player in the UK intermodal market. We look forward to maintaining our close alliance with Maritime as the industry focuses on modal shift while delivering sustainable solutions and innovation to our customers.”

Since DB announced its collaboration with Maritime back in 2019, the number of services operated by DB on behalf of Maritime Intermodal has now doubled, from four to eight. Last year, DB and Maritime won the Rail Freight and Logistics Excellence Award at the 2021 Rail Business Awards. That success reflects the growing demand for rail-based intermodal traffic.

Building on relationships and history

Maritime’s Executive Chairman, John Williams, said this was an opportunity to build on the relationship with DB Cargo UK while providing his customers with sustainable, complete and cost-effective transport and storage solutions across the UK. “Demand for rail freight is rapidly increasing, and we recognise the importance of investing in our terminals, plant, systems and more personnel to support our ambitions in rail”, he said. “We hope to expand our network of terminals to support both ours and our customers’ growth.”

Mossend EuroTerminal, formerly and locally known as Eurocentral, was built with support funding from an agency of the UK government – which the devolved Scottish government has since superseded in Edinburgh. The terminal was built on the site of former British Railways sidings, which served the heavy industry in the North Lanarkshire region of Scotland. These were principally local steelworks and coal mines in the area. The project represented part of a massive area regeneration, broadly known as Eurocentral, which has lottery attracted large-scale logistics operations and specialist manufacturing.