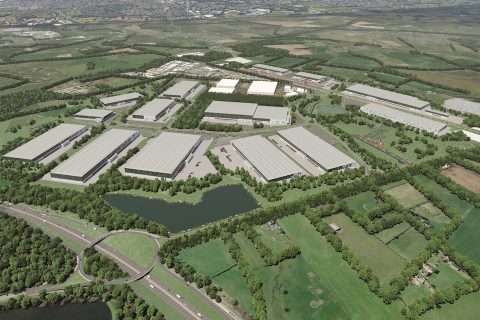 West Midlands Interchange, a planned terminal on the busy West Coast Main Line, has changed hands in a billion-pound deal (1.1 billion euros). A joint venture between Oxford Properties Group and Logistics Capital Partners will see the site near Birmingham progress towards serving the region’s growing logistics corridor. The partners have claimed that the rail-served facility will be the biggest logistics site in the UK.

A one billion pound investment by two of the leading players in the UK real estate and logistics sectors has taken control of the West Midlands Interchange. The project, which has had a protracted advance through the UK planning process, has moved a stage forward on the deal. The site, adjacent to the West Coast Main Line (WCML), will eventually stretch to over 700 acres (283 hectares) and generate around 8,500 jobs.

West Midlands Interchange has faced some adverse signals on the route to approval, but the new investors see green lights for the potential returns. However, it has been the greenfield nature of the project that has stalled development in recent years. For several years the project has met with opposition but has received planning approval, making it an attractive investment opportunity.

Oxford Properties Group and LCP say West Midlands Interchange will take several years to develop. There is already an acknowledged growing demand for rail-served logistics in the UK. The partnership says their acquisition will help address that need at a location already identified as the UK’s primary logistics corridor. They say West Midlands Interchange will also be a technologically advanced and environmentally sustainable development.

Planning consent, which has been the subject of much commentary, has been secured by the previous owners and allows for the delivery of the full ambition of the project. Infrastructure works are expected to commence in the first half of next year, with the first buildings starting on site in 2022 ready for occupation in 2023. Estimates from the new owners put the expected boost to the region at around 430 million pounds (475 million euros) of local economic activity each year and, through the supply chain, create over 900 million pounds (almost one billion euros) of economic activity each year, spread across the whole UK.

The UK government has recently pledged towards the modal shift to rail freight. The investors in WMI say that the interchange will be well placed to answer that demand. With the adjacent West Coast Main Line already one of the most important freight routes in the UK, used by 90 per cent of all intermodal trains, WMI is on track to take advantage of growing demand. They also note that HS2, the high-speed rail line linking London with Birmingham in 2026, will free up capacity, which they hope will increase rail freight demand at WMI.

In 2020, Oxford announced its intention to deploy £3 billion of capital in the European logistics sector over the next five years. Pierre Leocadio, Head of Investment, Europe at Oxford Properties, said this transaction presents an opportunity to develop a market-leading, prime logistics hub. “The inclusion of a new rail terminal in the master plan allows us to create a site that has strong appeal to potential occupiers while also helping reduce the environmental impact of its supply chain by reducing lorry traffic. The project will also create economic impact to the region by creating a significant number of local jobs.”

For the developers, Kilbride Holdings and Four Ashes, the Director of Kilbride Holdings, Peter Frost, expressed his confidence in the new ownership partners. “Having successfully guided the development from its inception and earliest stages to development consent, we are pleased that partners Oxford Properties and LCP will bring funding and specialist expertise to enable the project to now fulfil its huge potential”, he said.