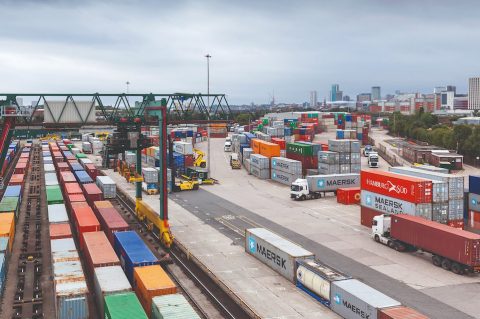 New research shows rail freight is levelling up Britain’s economy and cutting emissions across the country. The Value of Rail Freight report, from the Rail Delivery Group, says total economic and social benefits of rail freight are valued at 2.5 nillion British pounds (2.78 billion euros) every year. The areas benefiting most include Yorkshire in the north of England, Scotland and Wales.

Britain is facing unprecedented economic and environmental challenges, never before faced outside of war time. New independent research, commissioned by the Rail Delivery Group, says that rail freight is playing a big part spreading economic activity, and supporting a green recovery from COVID-19.

The Rail Delivery Group, the membership organisation representing UK’s passenger and rail freight companies, has commissioned independent research by analysts Deloitte. The outcome of the work, the Value of Rail Freight report, has shown that the rail freight sector delivers billions in economic and social benefits around the UK. They conclude that the sector could play a major role in supporting the country to reach net-zero carbon emissions.

Government mandated targets mean that the whole of industry will be required to be net-zero carbon by 2050, with some tough milestones along the way. Far from contributing to that problem, the report points out that rail freight is already cutting Britain’s carbon footprint. By effectively preventing seven million heavy goods vehicle journeys each year, rail freight is supporting economic activity at one quarter of the carbon burden compared with road transport.

The commercial value of the sector has been reappraised too. Using new framework references, the analysts Deloitte have concluded that the value of a rail freight path can be worth up to 1.5 million GBP (1.78 million euros) each year. That means businesses all around the country benefit from reliable and economical transport services, providing efficient routes to markets and better connectivity to ports, supporting access to markets around the world.

“The significant economic and environmental benefits that the rail freight sector contributes to UK society are clear from this report”, said Eddie Aston, the newly appointed chief executive at Freightliner UK. “In my previous roles, I have observed at first hand the many benefits that using rail brings to the logistics sector, including high reliability, improved safety and reduced congestion on the road network. I am pleased that this new piece of work enables the real economic benefit of rail freight to be calculated for the first time and provides valuable data to better inform decisions around the best use of the rail network.”

Deloitte’s new framework model highlights the benefits that could be realised by transporting more goods by rail. “Rail will play a central role in levelling up Britain and rail freight is already doing some heavy lifting, supporting businesses and jobs across the nations and regions”, said Robert Nisbet, Director of Nations and Regions for the Rail Delivery Group m(RDG). “As we work to secure a green recovery from Covid, encouraging more businesses to move their goods by train coupled with a rolling programme of electrification would see rail freight play an even bigger role in helping the nation to meet its carbon commitments.”

Increase in rail freight will not only shrink Britain’s carbon footprint but cut traffic jams too. The Deloitte research shows that rail freight is tackling gridlock and pollution in England’s most congested city, removing as many as 1,000 lorries from London’s roads every day with similar benefits for cities across the UK.

Customs benefits for EU too

In agreement with official government figures, the study found that freight trains are transporting more consumer items, including groceries, cars and electronics than ever before. The volumes of building materials moved by rail have also continued to grow, supplying construction materials to improve the road network, build new houses and infrastructure projects around Britain.

“As Britain begins a new era outside the EU, increasing rail freight will help to cut customs queues at ports”, says the RDG statement. “With government recently granting funding to create a new customs approval area at an inland rail freight terminal, a proposal first made by the Rail Delivery Group in 2018, the rail freight sector has played a crucial role in the national response to the end of the EU transition period, helping to keep goods moving securely and the economy ticking.”