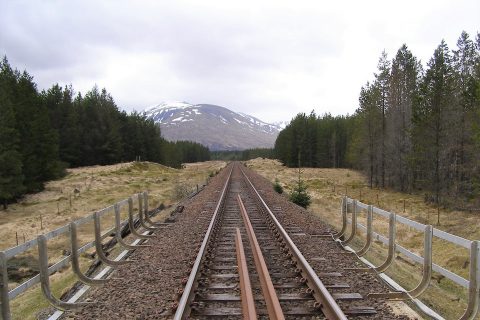 Published on 15-04-2021 at 11:41
Rails through Rannoch Forest in ScotlandScottish Government

A rail freight project which could move over 500,000 tonnes of timber out of Rannoch Forest in the Scottish Highlands has taken a major step forward. A new Memorandum of Understanding has been signed between the Scottish government and private sector interests to construct a log stacking and timber loading facility, north of Rannoch railway station, on the remote West Highland Line.

Timber was once a frequent load for rail freight in the UK, but Scottish flows had ceased by 2010. A successful trial last year in the far north has prompted renewed interest. Forestry Scotland, an agency of the Scottish government in Edinburgh, is working with commercial partners to establish a new flow in the West Highlands – on the line that has become famous as the route of Harry Potter’s Hogwarts Express.

Not a wand, but a pen was waved to sign a new understanding between various government and industry partners. The spell should see new timber traffic brought to the UK railways. Plans are underway to establish a timber handling station in the west of Scotland.

The new facility will greatly reduce the need for up to 4,000 lorry trips that are estimated to take place each year using one fragile road that provides access to the forests in the area. This action is estimated to save on around 650 tonnes of harmful CO2 emissions annually.

According to official sources, the next decade will see up to 50,000 tonnes of timber moved every year from Rannoch Forest. Timber is an important part of the rural economy, but the industry recognises that harvesting has to be conducted in ways that minimise the impacts on local people and the environment.

With the success last year of the trial runs between Georgemas Junction in the very far north of Scotland, and a timber plant near Inverness, supporters are very confident of this project making it through the demanding approval process. Any new rail facility would help achieve environmental goals and be a good example of modal shift to using rail as a viable means for transporting timber.

The memorandum of understanding has been signed by Scottish Forestry, BSW Timber Ltd, Fountains Forestry UK Ltd, Lord Pearson of Rannoch, and Ferguson Transport and Shipping. The proposed timber loading facility is to be located on Lord Pearson’s land, north of Rannoch station. BSW Timber Ltd will lead the construction and run the loading facility with the co-operation of the other partners. Tony Hackney, the cheif executive of BSW Timber said they project was certainly on its way.“A tremendous amount of work has gone into the project to date and there is still a lot to do, however our ambition has always been to rejuvenate the rail access to the site and with support from all parties this will happen. The benefits to road users in general will be great utilising a forestry resource which at this time is inaccessible.”

Fountains Forestry will act as agents for the owners of a very large tract of commercial forestry which is located in the surrounding Rannoch area. The next step in taking forward the project will consist of final discussions on the commercial deals and design of the siding, followed by submission of the detailed planning applications and subsequent approval. Work will then be tendered and agreements put in place which should be as early as this summer.