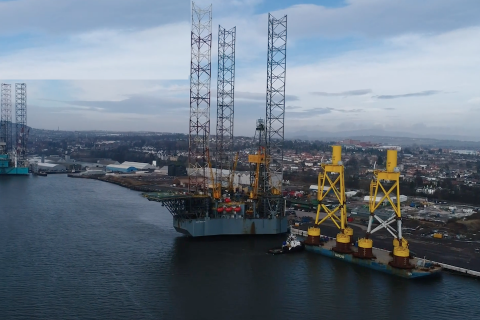 The UK has a freeport initiative, and the English winners were announced by the UK chancellor Rishi Sunak in his budget speech in March. However, the devolved governments in the UK have responsibility for Northern Ireland, Wales and Scotland. They can make their own arrangements within the scheme. The Scottish government has been first to act and has chosen to designate their scheme ‘Green Ports’. That could mean good opportunities for the greenest freight option of all – rail.

As part of a radical attempt to rejuvenate the UK economy, all four of the governments in the United Kingdom have been charged with designating ‘freeports’ around their coast lines, and even inland. The UK government, which has exclusive responsibility for England, has already made its designations for eight locations, all of which have active rail terminals, including a chosen inland port, at East Midlands. None of the other three devolved governments have nominated their choices yet, but the Scottish government in Edinburgh has called their plans ‘Green Ports’. There is an obvious incentive there for rail freight to live up to its environmental credentials.

Freeports are a legislative instrument, which give designated areas finance and tax breaks, designed to stimulate investment, particularly in manufacturing industry. The free port concept allows for raw materials and unfinished parts to be brought into the area.

Any manufacturing and finishing can be carried out, and finished goods exported again without incurring domestic tax and customs charges. Rail freight has an obvious part to play, conveying goods in and out. Most usually, but not exclusively, freeports are associated with coastal installations, but do not need to involve maritime shipment from the location.

Clearly, rail makes the best ‘green’ case for logistics handing at freeport locations. The Scottish government designation is good news for the rail freight industry. Scotland’s geographical remoteness from much of the domestic market in the UK makes logistics more expensive. Any economic advantage will be keenly examined by potential investors.

There was initial resistance to the free port concept from the Edinburgh government. However, in a change of heart which political opponents have strongly ridiculed, the ruling Scottish National Party have embraced the idea, with the green port twist. In addition to economic incentives, according to government sources, the Scottish green ports will also be areas where “low wage, low value opportunities” will not be established.

Areas under consideration are believed to include the Cromarty Firth, north of Inverness. The region has a rail connected port at Invergordon, and has been subject to economic challenges for over a decade. The area was under independent consideration for some form of free trade zone, prior to this initiative. Other areas suggested include Aberdeen, where the Harbour Board recently announced a massive expansion and brand new rail-served facilities. Also on the east coast, 100km further south, Dundee could benefit from an economic revival to reinvigorate its industrial waterfront. Of all the suggested locations, Dundee is possibly the location with the most extensive rail growth potential, albeit much of the original infrastructure is abandoned.

On the River Forth, the area of Rosyth could have its economic future secured by green port status. The naval base there has a moribund branch line, which used to carry passenger traffic to the base. The existing but under used deep water port of Hunterston has been mentioned too. Situated on the west coast of Scotland, the port lost its rail-borne coal traffic when the UK pulled out of fossil-fuel power generation.

Only the radical proposal of designating the Orkney Islands has no prospects for rail connection. The Scottish government has not launched the application process yet, blaming a delay from London and the start of the statutory ‘pre-election period’ prior to upcoming Scottish elections in May.