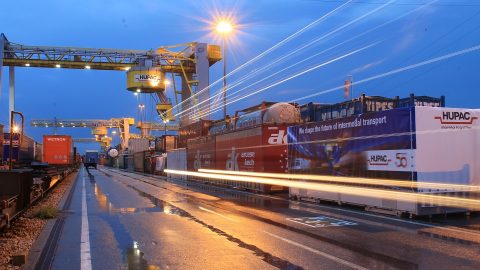 Hupac has started constructing a new terminal in Central Poland. The new facility will be located In Brwinów near Warsaw. By autumn 2022, the operator will be able to handle 740 metre long trains on 4 transhipment tracks at this centrally located facility.

The new transshipment terminal will allow for the consolidation of trains to Russia and China carrying goods from all over Europe. From central Poland, many intermodal trains depart to Asia, and many trains return through the popular border crossing between Belarus and Russia.

Hupac has a variety of terminals in its repertoire, as it believes that it is important not only to facilitate the journey, but also the transshipment. This terminal is constructed by Hupac Terminal Brwinów, a local subsidiary of the Swiss company.

The project covers an area of ​​almost 14 hectares. It includes a storage yard of 42,000 m2 , four transhipment tracks with a minimum length of 750 m and administrative buildings. The containers will be handled by reachstackers.

In the second phase, three more transhipment tracks and high-performance gantry cranes will be added. The maximum capacity of the facility is limited to 180,000 intermodal units per year.

After the completion of construction works, the terminal will offer road and rail transhipment for intermodal units, as well as additional services such as storage, warehousing and last mile transport.