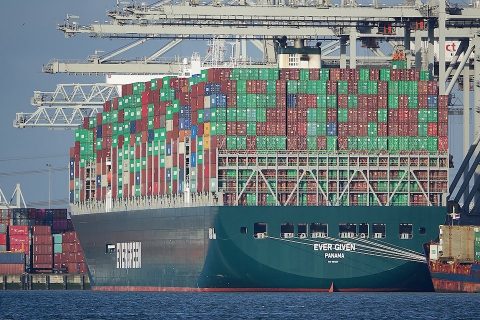 Suez Crisis, what does it mean for UK rail freight?

With a Rotterdam-bound super carrier aground for almost a week in the Suez Canal, and world shipping in turmoil, where did that leave global logistics, and the impact on UK rail freight? The scale of maritime transport puts pressure on quayside handling at the best of times, and with hundreds of ships disrupted by the errant Ever Given, how long will the logistics backlog take to unwind?

The grounding of the 200,000 tonne Ever Given, a behemoth of the Taiwanese Evergreen container fleet, has brought a significant part of world trade to a standstill. The blockage of the Suez Canal by the ship has effectively cancelled twelve per cent of global commerce overnight. The massive ship, fully laden with containers en route to European ports, including Felixstowe in England, is costing billions in lost revenues and surcharges. For shoreside handlers, already struggling with a disrupted logistics chain, it is the sum of all fears come home to roost.

Ever Given is one of eleven Japanese-built ships, chartered to the Taiwanese Evergreen company. The vast scale of these ‘golden class’ container ships puts extreme pressure on their ports of call. Tying up with 20000 TEU is a mammoth operation for shore-side handling. Rail freight alone would take around 130 trains to distribute the entire cargo. Sister ship Ever Glory is already in dock at Felixstowe, having sailed broadly the same route through the Suez Canal earlier in March. That ship also called at Rotterdam prior to docking at the English port.

Handling a ship with four times the displacement of the Titanic is not something that all ports can accommodate. The scale is quite staggering. Put in perspective, the vast mountain of 11000 containers of government ordered personal protective equipment, much of it backed up at Felixstowe during the pandemic, amounts to little more than a half load for Ever Glory or any of her ten sisters.

The non-arrival of Ever Given, and the huge traffic jam in the Gulf of Suez, means that shipping bound for UK ports is stalled, or at best significantly delayed by re-routing around the Cape of Good Hope. That will add ten days to voyages. At best, British ports can expect a surge of traffic in mid-April. That will put considerable strain on the handling capacity of UK rail freight operators. Moving train loads to inland distribution hubs, is something that planners are already considering.

The relief for UK operators is the additional network capacity, made available by the currently reduced passenger timetable. However, paths are one thing, having rolling stock and motive power in surplus is another. The UK intermodal sector is expanding, with GB Railfreight the latest to announce their intention to purchase one hundred new intermodal units for delivery from next summer. That does however suggest that the fleet is at capacity already. There’s a danger that the surge will go by road transport.

There is never a good time for a maritime mishap, but the floundering of the Ever Given is pretty much a worst case in the worst place, and at the worst time. Worldwide logistics, particularly intermodal operations, have been disrupted around the globe. The main reason is of course the pandemic, which put container distribution out of sync everywhere. The well documented challenges at Los Angeles – Long Beach are a case in point. Both ships waiting to berth and trains waiting to unload have been backed up in the Californian sunshine.

The blockage already represents the most disruptive event in the Suez Canal since the military conflict, commonly known as the Suez Crisis, closed the route for six months, between October 1956 and March 1957. Britain’s rail freight operators have a reputation for flexibility and response to adversity. The grounding of the Ever Given could however make the ill-advised imperial adventure of the 1950s seem like a skirmish by comparison.