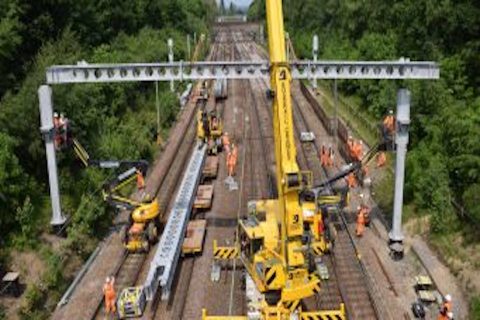 Published on 03-03-2021 at 10:51
Crossrail-Shenfield-OLE-Gantries-Installation-Orange-Army-Network Rail

Network Rail, the UK infrastructure manager, has launched a project to encourage more innovation and more businesses to engage with the network, and deliver better value. The Rail Investment Centre of Excellence, which will bring together several existing efficiency drives, will, according to the agency, put the focus on efficient delivery of major projects and investment.

The Rail Investment Centre of Excellence aims to incorporate much of the existing ‘Open for Business’ programme, and accelerate their own reform schedule, broadly known as ‘business as usual’. Network Rail says this represents part of wider organisational changes, which will give the company a more seamless view of rail investment, and provide confidence that benefits for passengers and freight users will be delivered more efficiently.

The new structure will incorporate several administrative departments. This should make it easier for independent contractors to engage with Network Rail, and therefore help deliver a wider ranging ‘Open for Business’ programme. Network Rail says this restructure will accelerate its planned transition to ‘business as usual’ one year ahead of schedule, having completed the milestones set out by the Hansford review, a government backed report which was presented four years ago.

For several executives, the changes will take place as soon as next month. NR say the Rail Investment Centre of Excellence will support all aspects of management throughout the investment lifecycle and delivery of major projects, by working closely with Network Rail’s five devolved regional businesses, as well as supporting traditional operations, maintenance and renewals (OMR) activities. Bringing innovation and technical advance to the railway is fundamental, and this announcement will come as interesting news to the delegates at the forthcoming RailTech Europe at the end of the month.

Implementing structural changes should not negatively affect existing projects, such as the East Coast Main Line upgrade. According to Stuart Calvert, who has been appointed as director of the Rail Investment Centre of Excellence, it will provide support to help deliver projects quicker, more efficiently and at lower cost. “Fundamentally, an effective Centre of Excellence is a catalyst, supporting and accelerating continuous improvement of investment management in the regions, by looking at new technology, innovation and smarter ways of working”, he said.

The Centre, say Network Rail, will streamline certain management processes, in line with their ‘Open for Business’ programme. David Ollerhead, programme director for Open for Business, said that it will make it easier for other organisations to invest in and build on the railway. “By definition, all programmes have a beginning, middle and end. We’ve made good progress on our journey to become more efficient and more customer-focussed. We’ve also laid the foundations for our route and regional businesses to continue that success.”

Since its inception in July 2017, say Network Rail, the Open for Business programme has established new business development teams in the routes and regions to work closely with third party funders, overhauled 400 of its most difficult and restrictive standards whilst introducing a ‘standards challenge’ process, which has produced multi-million pound savings, and regularly published a pipeline of schemes for other organisations to invest in.

The announcement comes on the back of the recently adopted Project Speed – a government-led initiative to streamline economic investment and stimulate growth.  Network Rail says it has overhauled how it works with other organisations to make it easier for customers and suppliers to engage with agency, and bring new players into the market. Putting the spotlight on freight, Network Rail’s director of freight, Charleen Wallace, will be the main guest on this week’s RailFreight Live (Friday, 1200UK, 1300CET) as our weekly broadcast focusses on the UK scene.