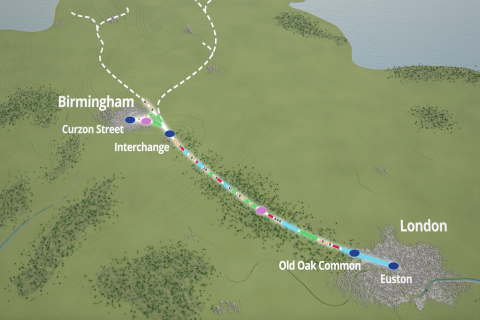 The company behind Europe’s biggest infrastructure project, building the high speed rail project in England, has celebrated the first year of construction. HS2 Limited has graphically outlined of the scale of the works now underway. With 240 sites active along the 100-mile route between London and the West Midlands (160km), HS2 now claims over 13,000 directly-employed jobs, with tens of thousands more in the supply chain. HS2 continues to promote its benefits to rail freight by freeing capacity on the network for more services.

HS2 Limited, the company behind the HS2 project, has committed to rail freight during the construction stage of the line. Across the whole HS2 project, they claim 15,000 freight trains are set to be used to haul 10 million tonnes of aggregate, taking the equivalent of 1.5 million trucks off the UK roads.

With much of the line set to be underground, work has already started on tunnelling. Next year, the four Tunnel Boring Machines (TBMs) will dig under the Chiltern Hills, in the longest single dig. Work is also underway at the four station sites, each set to be among the biggest stations in the UK – a rebuilt Euston Station terminus in London; and Old Oak Common, the massive interchange in North West London. The line will have two further stations, both in Birmingham: Solihul Interchange and the terminus at Curzon Street in the city centre.

The project’s rail freight depot, in Willesden, which will eventually become Old Oak Common, will ramp up in 2021. Among the contacts due to be awarded, worth 12 billion British pounds (13.4 billion euros) are those for the dig into central London, which will eventually reach the redesigned Euston station. It is anticipated that spoil and aggregates for HS2 alone will make a statistically significant difference to freight commodity figures for the best part of a decade to come.

Fabrication and manufacturing is also set to come on stream in 2021, much of it sourced in the UK. Precast track panels are set to be manufactured by PORR UK, at a brand new facility in Somerset in the West of England. 500 jobs will be created, not including the contracts to transport the panels onto sites up and down the line.

2,400 tonnes of structural steel, has already been delivered to the south portal of the Chiltern tunnel by Nottinghamshire-based fabricators, Caunton Engineering. The steelwork will be used in the temporary pre-cast factories that will create the tunnel wall segments and the nearby Colne Valley Viaduct.

Despite continued resistance by environmental activists, who claim the project is detrimental to wildlife habitats, the project team say that in the coming year they will add to the 190,000 trees already planted, as they aim for an eventual total of up to 430,000 across the whole first phase. Project managers will be hoping for the right sort of leaves on the HS2 line in the next twelve months.