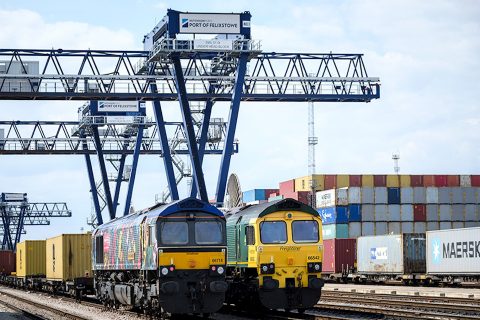 Is Felixstowe sinking under a sea of containers?

Felixstowe, the busiest intermodal port in the UK, is struggling to deal with cargo logistics, and a mounting backlog of shipping containers is causing frustration for maritime and road operators. The east coast of England port has come in for criticism for falling behind global competitors in cargo handling efficiency. However, the operators Hutchison Ports have published figures refuting those claims. Meanwhile, anything up to thirty intermodal trains depart daily for destinations all over the UK.

According to reports in the UK media, retailers, shipping and haulage companies have complained of what the newspapers call ‘chaos at Felixstowe’. There are concerns that retail supplies will be adversely affected in the Christmas trading period. Shipping sources say that one vessel, a huge container transport operated by Taiwanese shippers Evergreen, had been redirected to The Netherlands because of delays. It is common practice for ships to change destination port while at sea, but retailers are complaining that their consignments are not getting through on time. According to reports in the UK national media, the cargo was unloaded in Rotterdam and ferried back to the UK via Hutchison’s other facility at Thamesport London.

In an operational statement from the operators of Felixstowe, rail freight comes out with flying colours. Hutchison Ports remain proud of the throughput by rail from the quayside. Representing about a quarter of the total handling at the port, rail has been performing without adverse comment. “In the week to 8 November, 2020”, says the operational statement from Felixstowe, “We handled 76,609 TEU across the quay; 29,080 containers to and from road vehicles; and 18,673 TEU to and from rail.”

A glance at the port timetable backs up those figures for rail. Scheduled departures from the three rail terminals pull out round-the-clock to destinations as varied as Leeds, Birmingham, Cardiff and Coatbridge in Scotland. Freightliner, GB Railfreight and Maritime all visit the port on a daily basis.

The London Financial Times newspaper quotes intelligence from third party observers, IHS Markit, claiming Felixstowe compares badly with worldwide competitors. It says port efficiency is not as good as rivals, such as Hamburg, Antwerp and the Dutch port of Rotterdam, where Evergreen redirected their container ship recently. They say cargo handling and docked shipping times are below average on a worldwide and European basis. Felixstowe is also behind other UK ports, such as London and Southampton. Delayed handling could mean trains departing less than full, or containers piling up on the quayside. It is the latter which is an acute problem at Felixstowe, although not a problem that is unique to the Suffolk port.

The big issue, say news reports, is a huge shipment of 11,000 containers of personal protective equipment (PPE) ordered by the UK government. The exceptional load is an example of a much wider issue of disrupted supply chains and displaced shipping containers, building up at ports, primarily in Europe and North America. Long Beach-Los Angeles is among other locations particularly badly affected by the growing mountain of shipping containers outstaying their per diem allowance. It is possibly no coincidence that the Long Beach-Los Angeles complex polls around the same figures as Felixstowe in the recent IHS Markit figures. Earlier this week, Portsmouth, on the south coast of England began repositioning shipments, moving empty containers to Europe for onward repatriation to Asian markets, in the beginning of a rebalancing operation worldwide.

With trains still departing, broadly untroubled by the issues surrounding the movements on the quayside and the concerns of road hauliers, Hutchison cite the pandemic as a major factor. “The Port of Felixstowe, like other major container ports worldwide, is still experiencing a spike in container volumes and dealing with the consequences of the ongoing Covid pandemic”, says their latest operational statement. “The current high volumes will last at least into December and possibly through into the New Year but we are working hard to minimise the impact on daily operations and to maintain vital supply chains.”

The company says it is actively recruiting more staff, primarily to deal with road-based traffic. Rail capacity, which requires infrastructure development, including expensive gauge clearance work on routes to the port, would be a much more long-term solution. “The imbalance in UK trade and Brexit stockpiling exacerbate current operational challenges and we are working with our customers and stakeholders to get through the current congestion”, the port told the BBC in a statement over the weekend. “Performance at the port remains under pressure due to the Covid pandemic, high levels of import traffic, the large number of empty containers and a large amount of unusually long-stay containers held at the port.” Hutchison recently did recruit former transport minister Chris Grayling as an advisor, in a move that raised eyebrows in the UK.

Meanwhile, today, there are around thirty intermodal departures scheduled from the three rail terminals at Felixstowe. If there is a remedy to that mountain of PPE, and all the other long stay containers, that remedy would appear to arrive on rails, and sail off into the sunset. Then again, the light at the end of that particular tunnel, really is another intermodal train coming.