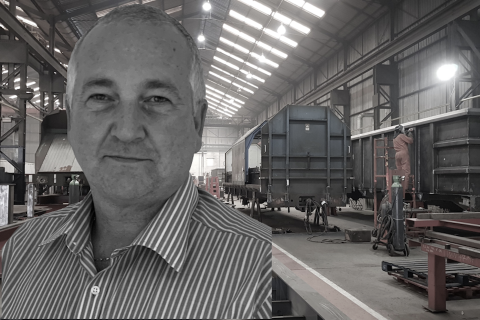 The days of large-scale freight wagon rolling stock building are over in the UK. This is the belief of Les Bryant, the group business development director at wagon builder WH Davis. All large volume manufacturing will be completed in the workshops of Eastern Europe and Asia, with the trend being for that work to go ever eastwards, he predicts. The future for British industry, he says, is in fulfilling lower-volume specialist orders. The East Midlands based company, which currently has a full order book, is the last independent freight rolling stock manufacturer in the UK.

Speaking in an exclusive interview with RailFreight.com, Les Bryant paints a picture for British industry that follows a model of highly-skilled specialist design and manufacture. He says that the traditional large volume factories, that were found all over Britain in the nineteenth and twentieth centuries are now gone. Manufacture of that scale is now found in Eastern Europe, with a trend to migrate even further east into Asia. Bryant’s interview comes ahead of day two of the 2020 European Silk Road Summit, which looks manufacture and logistics all along the rail freight corridors, and beyond.

There is good news however

Despite headline news of large orders recently placed abroad by railway businesses, including Transport for London’s new maintenance fleet, and Network Rail’s order for 570 wagons to support infrastructure works, Bryant nonetheless says the future is secure for specialist engineering companies like WH Davis. “As an independent company, WH Davis needs to be careful about how it develops and grows”, he says. “To install over-capacity would be a serious mistake for us. However, what that does mean is that, by being realistic about our plans to grow the business, we can keep our factory fully occupied, and offer a high level of security to all our workforce. That translates into a highly skilled and highly-experienced team, who have invested their careers in the business. That gives customers a unique level of service, within the confines of the volume we can deliver.”

That expertise is already being put to good use on a number of contracts for the company. Among the higher profile jobs on the production line at Langwith Junction in Derbyshire, is the delivery of a rake of eighty-four of the triple-articulated Ecofret2 flatbed wagons for German leasing company VTG. Orders of that magnitude and complexity are an area where WH Davis and British industry remain competitive, although not in a monopoly. The company did work hard on the order for Transport for London which, Bryant concedes, was unsuccessful and the work eventually went to China’s CRRC.

The award by Transport for London to CRRC was a landmark. The Chinese state-owned company previously had not secured an order with a Western metro operator. However, Bryant says that it should be seen in the context of global business, rather than the advance of Chinese industry.

“Large scale manufacture has retreated in all the Western European centres, even in the big industrial nations like France and Germany, although in the latter, the culture of smaller-scale, specialist engineering has been very much better supported. The concept of the Mittelstand, the modest-sized, specialist engineering companies, has become a much bigger part of the German economy than elsewhere, including the UK. A company like WH Davis, if it were based in Germany, would be part of a much wider family of businesses, all developing and manufacturing low-volume, high-quality products for specialist markets. However, without making any accusations, other than businesses doing what is good for their business, global players can afford to make smaller orders for smaller markets on the back of homogenous designs for the wider global market.”

Looking to the past to see the future

Not dismissive of the part played by the modern passenger-stock assembly plants coming to the UK, Bryant says that the employment opportunities they offer are worthwhile, but do not reverse the trend that is already decades old in the UK. “Major manufacturing is migrating ever eastwards”, he says. “Hitachi, Bombardier, Siemens are all assembling, not manufacturing, but it has been that way since end of the last century. Since privatisation, the leasing culture has moved steadily overseas, and the major leasing companies in Europe all have close relationships with the major manufacturers in Europe, and that’s where the large orders will be placed.”

Actual manufacture, design and fabrication, remains to a large part the preserve of WH Davis. While never expecting to capture all of the UK demand for new wagons, which Bryant estimates at up to 400 units annually, he does expect his company to prosper in the domestic market. “It may be more difficult for us to serve the European market due to gauging restrictions, than for European manufacturers to reach into the UK, but we can still serve the sector well from at home. With skilled East European engineers leaving their professions to earn more in Western Europe supermarkets, the likelihood of manufacturing moving even further down the Silk Road is almost inevitable. That’s not necessarily bad for WH Davis and not necessarily bad for British engineering in general. We’ll not see the big works coming back, but we may see more competition in the niche, specialist sectors. If that means a bigger market all round, I would be ready to welcome that.”