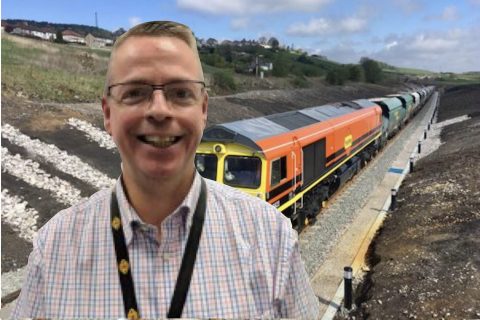 Tough times for UK rail freight but optimism ahead

UK freight operations are more challenged than ever but optimistic for the future, says the head of service development at Freightliner Jon Bunyan. He has been a rail freight professional since the UK railway network was a nationalised industry. With infrastructure and passenger operations back in centralised control, freight remains the only commercial player on the tracks. That, says Bunyan, is a mixed blessing for the sector, now operating in even more challenging times than ever.

Changes in ownership have only served to enhance the values of Freightliner, says the life-long railwayman, whose 36-year experience has been rewarded with elevation to head of service development for their entire UK operation. He claims there is never a dull moment in the world of rail freight.

During the early months of the coronavirus pandemic, railfreight had been called the ‘hidden key workers of the UK’, but the sector has remained modest about its contribution, preferring to applaud the efforts of others. Freightliner’s ‘Over the Rainbow’ locomotive was a high-profile recognition of health workers in the UK. Meanwhile, the operators quietly got on with keeping the trains running. “The rail freight industry has seen volumes fall across different commodities as a result of the pandemic, mainly driven by the closure of non-essential retailers and the temporary closures of some construction sites”, says Bunyan, who notes it has also been an opportunity to review commercial practices.

“We have sought to respond to this situation by trying to improve our efficiency and productivity. For example, we have been running two 775-metre container train circuits out of Southampton to Manchester and Leeds, where these trains would usually operate at 640 metres. This has been possible as a result of fewer passenger services using the network, thereby releasing some timetable constraints. We are also working closely with Network Rail to run other 775 metre trains from Southampton as well as from other deep-sea container ports, to further improve efficiency and productivity.”

A long-term change to less passenger commuting could release capacity on the congested UK network, believes Bunyan. His career has taken him around a number of London terminals, that have since lost their intermodal capacity, but may become commercially viable again, given the shift towards a carbon-free economy. That political agenda has helped stimulate development at Southampton, another of his former bases. Bunyan even alludes to freight operations in Ireland, where he worked on connections from the Welsh port of Holyhead into now discontinued Dublin-Belfast services. A return to freight operations in Northern Ireland may be a long way off, even if the Republic of Ireland is re-examining modal shift towards rail freight. For now, the concentration for Bunyan is on operations in Great Britain.

Freightliner is currently running longer and heavier trains, and aspires to putting on more flows as business allows. Bunyan says the changed pattern of traffic gives rail freight an opportunity to improve competitiveness, and take advantage of its natural benefits of speed and reliability. “This could represent a step-change for the sector in terms of productivity and efficiency and therefore for overall competitiveness”, he says. “The drive towards decarbonisation by 2050 presents an opportunity for rail freight.”

Rail already has very strong environmental credentials, and Bunyan says there is an opportunity to work with businesses to deliver improvements to their environmental footprint and ultimately ensure that rail freight plays a key role in achieving net zero for the UK economy. “When national power generation is decarbonised in the future, electric freight trains would effectively operate with zero carbon emissions. Therefore, to realise the Government’s commitment to decarbonise the UK economy by 2050, further modal shift in the freight sector towards rail is imperative.”

Following their own decarbonisation agenda, Freightliner took the decision to pick up 13 class 90 locos, freed up from the Greater Anglia passenger franchise, thereby releasing older class 86 locomotives for extensive overhauls. That means that the 86s, originally built for express passenger trains on the West Coast Main Line, will be in productive service into their seventh decade.

“Freightliner is the largest freight operator of electric traction and we are looking to deploy electric locomotives on more routes”, says Bunyan. However, with more than half the UK rail network is not electrified, Bunyan says that they need to work work with the infrastructure agency Network Rail to develop its Traction Decarbonisation Network Strategy (TDNS) and with the Department for Transport on priorities for infill electrification, where relatively short stretches of electrification could unlock the use of end-to-end electric traction. “It is increasingly clear that there is no alternative technology, other than electrification, to replace diesel traction. We are collaborating with industry partners to understand what bi-mode fuels may be suitable for last-mile capability, or over short stretches where there is no overhead line.”

Levelling up the economy

Bunyan believes the UK government remains committed to its ‘levelling-up’ policy on the economy, to redress the imbalance in favour of the region around the nation’s capital. Bunyan says that railfreight is ready to support that policy and support growth across the entire UK. “With 87 per cent of economic activity in the sector occurring outside of London and the South East, rail freight already supports decentralisation, creates employment opportunities and supports British businesses. This includes providing routes to export markets for British businesses, particularly those in the East and West Midlands, North East and North West and Scotland and by doing so supports the levelling up of the economy.”

Having overseas owners, the American Genesee & Wyoming, has not changed the commercial imperative of Bunyan’s Freightliner. He does though say there has been some quite surprising changes. “The initial benefit was the advancement of the G&W safety culture and, whilst we in the UK have always had a very good safety record, our perspective and focus has shifted for the better.”

With the business passing through a number of well-funded owners, there has been investment which has allowed systems to be modernised. It may be a world away from the railway of the 1980s, but Bunyan maintains it is every bit as challenging as in the first of his 36 years in the profession. Right now, he’s working on the next five years for the company, which suggests a confidence in the economic recovery that the whole country could do well to follow. His enthusiasm remains intact. “There never is a dull moment in the world of railfreight.”