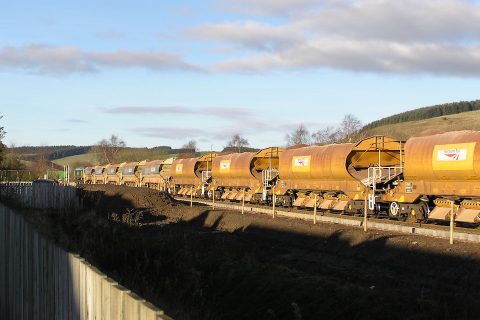 Among the ten schemes supported in the first round of UK’s Restoring Your Railway Fund, two have a rail freight element and one may help relieve the busiest mixed use main line in Europe. The fund is part of a scheme launched last month by the UK government. It is designed to reconnect communities left without rail services after a programme of closures in the late 1960s.

Some may say it is fifty years too late, but an initiative has been launched by the UK government to systematically restore severed rail connections. The programme will reinstate lines that were closed under a modernisation plan designed to make Britain’s railway system pay its way commercially. Not surprisingly, the scheme is oversubscribed.

Freight infrastructure rarely attracts the public support that potential passenger-led schemes command. However, rail freight could be a collateral benefactor from a successful project in North West England. Campaigners seek to restore frequent services to a little-used connection between the towns of Clitheroe in Lancashire and Hellifield in Yorkshire.

The line is currently open, but used infrequently by weekend passenger services. Its upgrading has been backed by local communities, but also by the local authorities, who say it will provide an economic lifeline for the under performing region. The success of the bid has been put down to the collateral benefits that would accrue from the project.

The line, which will reinstate a missing connection between the two regions, would also provide a viable freight route for north-south traffic, helping to take pressure off the congested West Coast Main Line.

“It will be a huge boost to the borough, worth tens of millions of pounds to the local economy”, said Stephen Atkinson, the leader of the local authority at the heart of the project, Ribble Valley Borough Council. “The main infrastructure is already in place and the Clitheroe to Hellifield line is in good condition, which gives us a great start. “We are looking forward to working with the community over the coming years to bring this fantastic scheme to fruition.”

Freight traffic from Manchester and distribution centres further south could also use the line to avoid some of the notorious bottlenecks around the city. It may however be several years before lines in the area are electrified, which limits their commercial attractiveness. Several other schemes in the area were put forward, all of which were passenger led. Although none have made the first ten to be examined in detail, local groups remain optimistic of success in future.

Grant Shapps, the UK transport secretary launched the scheme with the intention of reopening some of the lines closed under an infamous review, which saw almost half of the UK network closed during the 1960s. Back in August, one other scheme was announced, which will see passenger services restored to the Fawley Branch, a line serving communities near Southampton. The line has remained open for occasional freight services.