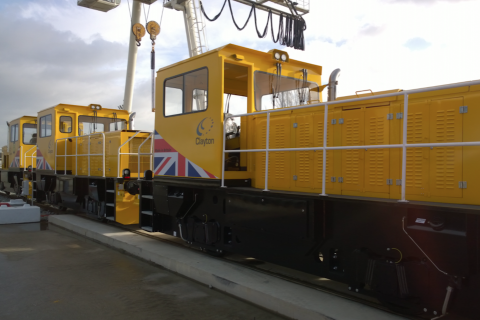 Iconic British manufacturer Clayton Equipment Company has significantly increased its workforce to cope with international demand for its range of shunting and switching locomotives. The Burton-Upon-Trent firm is adding around forty per cent to its roster, taking the workforce to about 200 staff. Clayton say the recruitment is down to the success of its hybrid and batter powered locomotives, which are in unprecedented demand.

The British manufacturer Clayton, which celebrates ninety years in business next year, says it is experiencing its best period of growth, since the company returned to independent control early in 2005.

According to the company, the growth in staff numbers, represents a huge boost to the business. It coincides, they say, with a record number of new contracts and forward orders for their innovative hybrid locomotives. Although the company is remaining tight-lipped for commercial reasons, industry insiders say that designs that were available almost off-the-shelf this time last year could be on order books now that are bursting for the next three years.

The company, which was founded in the railway hub of Derby in 1931, moved its entire operation to neighbouring Burton-Upon-Trent in 2006. The modern location has potential for expansion and although not currently connected, it is adjacent to an operational railway.

Moved on considerably since the 1960s

In the UK today, Clayton is best known among industrial customers. They supplied heavy-duty battery-powered shunters to a South Wales steel works, and recently fulfilled an order for the London Underground system. Among heritage enthusiasts, the company is synonymous with the early British Railways diesel Class 17, often referred to simply as a Clayton. It was one of many designs, rushed to service by a variety of manufacturers, to answer the rapid modernisation plan of the early 1960s.

Its distinctive large central driving cab design has endeared it to enthusiasts, however circumstances against the model, which did not reflect well on the company at the time. Clayton has moved on considerably since then, and is now regarded as among the world innovators for industrial locomotive design.

While the company promotes its hybrid and battery locomotives most prominently, it still provides more traditional diesel technology for appropriate markets. However, Clayton is becoming more active in the conversion field, re-engineering diesel motive power to run on zero-emissions alternatives, including full battery conversion.

This recruitment drive has taken Clayton into a new level of manufacturing activity. “We are at a significant period in the company history”, says Clive Hannaford, the managing director at Clayton. “The increase in staff levels will ensure we continue to maximise our potential to provide our customers with a first-class service.”

In a bespoke delivery, Clayton supplied brand new hybrid motive power for the Snowdon Mountain Railway in Wales. With even more new technology on the way, Clayton looks set to reach even higher heights in the near future.