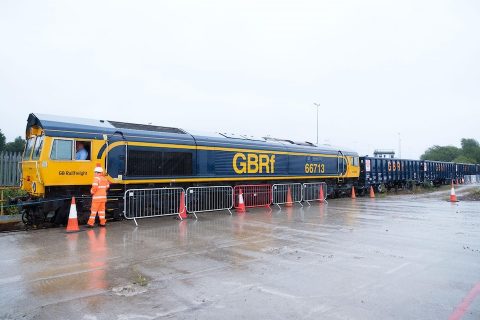 Freight operator GB Railfreight (GBRf) and supplier Rail Stone Solutions (RSS) will deliver aggregates by rail to HS2’s main construction compound in the West Midlands. Here, the high-speed line consortium is building its Birmingham Curzon Street terminus and Solihul Interchange stations on the 100-mile (160 km) route.
Having delivered the first aggregates train to HS2 just last week, GB Railfreight has announced details of an initial contract, which will see the operator collaborate on delivery of some of the 15,000 train movements estimated as required by HS2 over the next ten years. The deals, with HS2 main contractor consortiums EKFB (Eiffage, Kier, Ferrovial BAM Nuttall) and BBV (Balfour Beatty VINCI) comes as HS2 ramps up engagement with the rail and tech industries, following the official commencement of the construction phase. The huge civil engineering project is designed to connect London and Birmingham, and release new capacity on the UK rail network.

The partnership between GBRf and RSS, running up to Christmas, will require up to 157 trains to deliver 235,000 tonnes of aggregates for the first phase of construction work for HS2. Ten trains per week are envisaged, conveying up to 77 tonnes in 20 box wagons, which will transport 15,000 tonnes per week. The first trainload arrived at Balfour Beatty VINCI’s Birmingham Washwood Heath construction site last week. GBRf will act as facility operator, essentially operating that railhead. Onsite contractors Rail Freight Services (RFS) will manage train unloading and materials handling.

As part of the deal with EKFB, GBRf will support the training of new drivers at their new hi-tech simulators near Peterborough. The operator recently commissioned the UK’s first and only full-cab freight European Rail Traffic Management System (ERTMS) simulator centre is located. Given the overall shortage of drivers in the UK, this represents a critical clause in the contract.

One hundred box wagons have been procured specifically for Balfour Beatty VINCI to utilise for rail deliveries to construct HS2. GB Railfreight will provide traction, drivers, ground staff and timetabling services. Aggregates are being sourced from a Tarmac quarry in the Peak District, Derbyshire.

A joint statement by the contractors says that transportation of aggregates by rail will eliminate the need for an average of four HGV road movements for every loaded freight wagon. For the services operating to Washwood Heath, moving 3000 tonnes of aggregate using HGVs would require 11,750 long distance road movements from the Peak District to Birmingham.

Now that construction has started, HS2 is forging ahead with appointing project partners. In addition to making significant use of rail freight, the company is engaging with hi-tech solutions providers to reduce its carbon footprint during construction phase and, ultimately, during operations.

Artificial Intelligence solutions are being trialled on a number of HS2 sites, and the company has today announced five partners in its Innovation Accelerator initiative. Wearable tech for construction sites and drone monitoring of arboreal biodiversity are among over 100 projects put forward for the first tranche of projects, all beginning this month. Applications now open for a second intake of young tech firms.