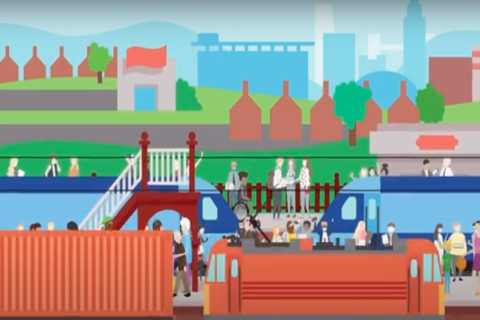 HS2, Britain’s high-speed rail project, connecting London and Birmingham, continues with civil engineering works on sites including Old Oak Common in the capital and Curzon Street in the West Midlands. With tunnelling machines set for delivery, the company has rounded up its commitments to enhancing the UK network and the environment.

Since the start of the 100 billion British pounds (110 billion euros) project, government policy in the UK has shifted towards greater emphasis on environmental issues and greening of the economy. HS2 still promises to bring journey times between England’s biggest two cities down below fifty minutes, but it has also shifted emphasis as well, on to enhancement of the network and the environmental benefits of the project.

Fixing the railways for freight

According to HS2, and backed up by government statistics, UK rail demand has more than doubled in the last twenty years. It is forecast to keep growing, with significant pressure on key north-south routes, including the West Coast Main Line (WCML). HS2 will broadly parallel that route, relieving pressure on the busiest mixed-use railway in Europe. Even so, HS2 say there is continually growing demand, sponsored by the political agenda. The UK government and the regional devolved administrations have all committed to promoting modal shift to rail, particularly for freight, which will more than offset economic retrenchment brought about by the current coronavirus pandemic. Demand for rail transport is therefore expected to rise significantly, both for passenger and freight.

“Further upgrades to current lines would cause significant disruption, and would deliver a fraction of the capacity as a new railway line”, claims HS2 Limited, the corporate body building the line. “By taking long distance services off the existing rail network, HS2 frees up space for more local, regional and freight services.”

The government in London has set an economic target for net zero emissions by 2050. In Scotland, the devolved government in Edinburgh has set even more stringent climate change targets, including electrifying the entire rail network by 2035, mostly by overhead wiring.

However, the advantages of emissions-free transport by rail remain constrained by capacity issues. Britain’s rail freight industry is disproportionately affected by pathing availability, which HS2 says it will address both constraint and climate issues at once. “Rail freight produces 76 per cent less CO2 per tonne of cargo compared to road haulage”, they say. “HS2 will be the low carbon alternative, and lower than the average across the UK’s existing rail network.”

Following on from the UK government’s green light for the start of construction, HS2 has set out its rail systems contract, worth £523m according to their own estimates, and including the critical turnkey design and build for power supply.

HS2 says that by seeking UK contractors, the project will also help address the economic imbalance between regions of the UK and the London-centred South East of England, and boost UK economic competitiveness overall. “Poor transport links between key cities and economic centres are constraining economic growth”, they say. “Better connected regions in Europe are out-performing comparable places in Britain, such as Greater Manchester and West Yorkshire.”

Three regional universities with engineering credentials, at Southampton, Birmingham and Huddersfield, have signed an agreement with HS2, as part of its ongoing innovation programme. The company says it will benefit from access world-leading research capabilities, knowledge and facilities. “The agreement with the UK Rail Research and Innovation Network (UKRRIN) will enable HS2 Ltd to be at the forefront of innovation in the rail sector, and help accelerate new technologies and products from research into market applications globally,” they say. The implication is that technology developed for HS2 will find commercial applications abroad, enhancing UK trade in the sector.

However, the down-to-earth advantages for rail freight remain in the sphere of capacity. Better balanced demand patterns, particularly on the mixed-use West Coast Main Line, will free up the paths necessary to grow the industry. Technological improvements are eagerly anticipated, but the availability of paths to run new services are anticipated most of all.